Edit
watch 01:54
Obi-Wan Finale - The Loop
Do you like this video?
Play Sound

Three songs have won the Own Africavision Song Contest, a competition organized by members of the Own African Union of Broadcasting. The contest has been held once in about one or two months since its debut in May 2020. The contest's winner has been determined using a basic voting method; awarding points to countries by juries and/or televoters. The country awarded the most points is declared the winner.

There have been 6 contests, with one winner each edition. Five countries have won the contest. Burkina Faso won the first contest, held in the DR Congo. Asides from Burkina Faso, Guinea-Bissau is the only other nation to win on its debut. All winning nations have won once, with Mauritius winning twice. 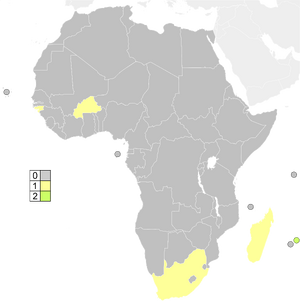 Map showing each country's number of Own Africavision wins up to the sixth edition.