Eight songs have won the Own Americavision Song Contest, a competition organized by members of the Own American Broadcasters Association. The contest has been held once in about one or two months since its debut in May 2017. The contest's winner has been determined using a basic voting method; awarding points to countries by juries and/or televoters. The country awarded the most points is declared the winner.

There have been three contests, with Antigua and Barbuda to win the first contest, held in Peru.

Michelle Andrade and Mozgi's "Amor" became the first winning song to be in a language other than English, which was sung in Russian and Spanish. 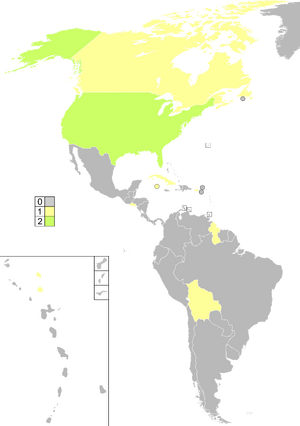 Map showing each country's number of Own Americavision wins up to the tenth edition.

Retrieved from "https://ownesc.fandom.com/wiki/List_of_Own_Americavision_Song_Contest_winners?oldid=93053"
Community content is available under CC-BY-SA unless otherwise noted.