Twenty five songs have won the Own Asiavision Song Contest, a competition organized by members of the Own Asia-Pacific Broadcasting Union. The contest has been held once in about one or two months since its debut in May 2015. The contest's winner has been determined using a basic voting method; awarding points to countries by juries and/or televoters. The country awarded the most points is declared the winner.

There have been 25 contests, with one winner each edition. Twenty countries have won the contest. China won the first contest, held in Mongolia. Apart from China, Qatar is the only country to win at its debut. The country with the highest number of wins is South Korea, having won four times, followed by China and Taiwan with two. The other countries have won once. 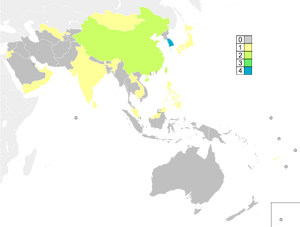 Map showing each country's number of Own Asiavision wins up to the twenty-fifth edition.

Retrieved from "https://ownesc.fandom.com/wiki/List_of_Own_Asiavision_Song_Contest_winners?oldid=97065"
Community content is available under CC-BY-SA unless otherwise noted.