Own Eurovision Song Contest Wiki
Register
Don't have an account?
Sign In
Advertisement
in: OESC lists, Lists of winners

Fifty-five songs have won the Own Eurovision Song Contest, a competition organized by members of the Own Eurovision Broadcasting Union. The contest has been held once in about one or two months since its debut in April 2012. The contest's winner has been determined using a basic voting method; awarding points to countries by juries and/or televoters. The country awarded the most points is declared the winner.

Pastora Soler and Bustamante's "Bandera blanca" became the first winning song to be entirely in a language other than English, followed by Vunk and Antonia's "Pleacă" which was sung in Romanian. 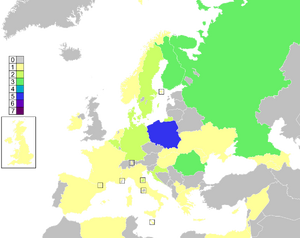 Map showing each country's number of Own Eurovision wins up to the Fifty-fifth edition.

Countries that are no longer eligible.