Own Africavision Song Contest 6, often referred to as OAfSC #6, is the 6th edition of Own Africavision Song Contest. The contest took place in Beau Bassin-Rose Hill, Mauritius, following DJ Assad & Laurell's win in the 5th edition with the song "Sweat". It was the second time Mauritius had hosted the contest, having previously done so in the fourth edition. Organised by the Own African Union of Broadcasting and host broadcaster Mauritius Broadcasting Corporation, the contest was held at the Sir Gaëtan Duval Stadium, and consisted of two semi-finals and the final. The three live shows were hosted by Laura Beg.

The winner was Madagascar with the song "Oh Mama" performed by Naïka. Algeria and Mauritania completed the podium, while Kenya, Egypt and Libya rounded out the top six. The host nation, Mauritius placed 11th. 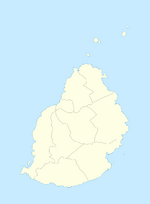 Beau Bassin-Rose Hill is the primary city which people come into for them to visit Jardin Balfour, a park where tortises run wild.

The forty-four semi-finalists were allocated into six pots, based on their geographical place and cultural similarities. Drawing from different pots helps in reducing the chance of so-called neighbour voting and increasing suspense in the semi-finals. Each time a country was drawn from the pot, its semi-final and half of the semi-final was determined.