Own Africavision Song Contest 7, often referred to as OAfSC #7, is the 7th edition of Own Africavision Song Contest. The contest took place in Antananarivo, Madagascar, following the country's victory in the 6th edition with the song "Oh Mama" by Naïka. It was the first time Madagascar had hosted the contest. Organised by the Own African Union of Broadcasting and host broadcaster Télévision Malagasy, the contest was held at the Mahamasina Municipal Stadium, and consisted of two semi-finals and the final. The three live shows were hosted by Noémie Lenoir.

A total of forty-six countries participated in the contest. Ethiopia, Guinea-Bissau, Rwanda, South Sudan, Tanzania and Uganda returned to the competition, while Cameroon, Liberia, Malawi and Somalia withdrew for various reasons.

The winner was Seychelles with the song "Elle est partie" performed by Sarahmée feat. Nissa Seych. This was Seychelles' first victory in the contest – and first top-ten placing. The song managed to receive the highest amount of points in the contest and currently holds the record of the best scoring winner, having earned a total of 228 points, as well as the biggest margin between the winner and the runner-up, 61 points. Republic of the Congo and Angola completed the podium, both of them achieving their best result in the contest, while Uganda, Ghana and Burkina Faso rounded out the top six. Rwanda, who qualified for the first time since their debut, and Nigeria achieved their best result and first ever top 10, placing 8th and 9th, alongside Central African Republic and Eswatini who finished on the 11th and 23rd places respectively. The host nation, Madagascar placed 17th. For the first time Cape Verde and Mauritius failed to qualify for the final. 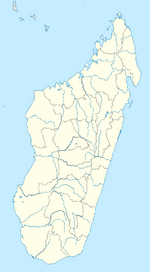 Antananarivo
Location of the host city.

Antananarivo also known by its colonial shorthand form Tana, is the capital and largest city of Madagascar. The administrative area of the city, known as Antananarivo-Renivohitra ("Antananarivo-Mother Hill" or "Antananarivo-Capital"), is the capital of Analamanga region. The city sits at 1,280 m (4,199 ft) above sea level in the center of the island, the highest national capital by elevation among the island countries. It has been the country's largest population center since at least the 18th century. The presidency, National Assembly, Senate and Supreme Court are located there, as are 21 diplomatic missions and the headquarters of many national and international businesses and NGOs. It has more universities, nightclubs, art venues, and medical services than any city on the island. Several national and local sports teams, including the championship-winning national rugby team, the Makis are based here.

Antananarivo was historically the capital of the Merina people, who continue to form the majority of the city's 1,275,207 inhabitants. The surrounding urban areas have a total metropolitan population approaching three million. All eighteen Malagasy ethnic groups, as well as residents of Chinese, Indian, European and other origins, are represented in the city. It was founded circa 1610, when the Merina King Andrianjaka expelled the Vazimba inhabitants of the village of Analamanga. Declaring it the site of his capital, Andrianjaka built a rova that expanded to become the royal palaces of the Kingdom of Imerina. The city retained the name Analamanga until the reign of King Andriamasinavalona (1675–1710), who renamed it Antananarivo ("City of the Thousand") in honor of Andrianjaka's soldiers.

The city served as the capital of the Kingdom of Imerina until 1710, when Imerina split into four warring quadrants. Antananarivo became the capital of the southern quadrant until 1794, when King Andrianampoinimerina of Ambohimanga captured the province and restored it as capital of a united Kingdom of Imerina, also bringing neighboring ethnic groups under Merina control. These conquests continued under his son, Radama I, who eventually controlled over two-thirds of the island, leading him to be considered the King of Madagascar by European diplomats. Antananarivo remained the island's capital after Madagascar was colonized by the French in 1897, and after independence in 1960.

File:Map OAfSC 07 Allocation.svg
Map showing the allocation of the participating countries in their respective semifinals.

The forty semi-finalists were allocated into six pots, based on their geographical place and cultural similarities. Drawing from different pots helps in reducing the chance of so-called neighbour voting and increasing suspense in the semi-finals. Each time a country was drawn from the pot, its semi-final and half of the semi-final was determined.

Twenty countries participated in the first semi-final. Algeria, Kenya and Libya also voted in this semi-final.

Twenty countries participated in the second semi-final. Egypt, Madagascar and Mauritania also voted in this semi-final.

Twenty-six countries participated in the final, with all 46 participating countries eligible to vote.