The Own Americavision Song Contest, often shortened to OAmSC is a song contest on Youtube held, primarily, among the member countries of the Own American Broadcasting Association since May 2017. The competition is based upon the existing Eurovision Song Contest held among the member countries of the European Broadcasting Union (EBU) since 1956. The current and official executive supervisor is Mihai Ghetiu.

The first contest was won by Antigua and Barbuda.

Main article: List of countries in the Own Americavision Song Contest

Any full member of the Own American Broadcasting Association is allowed to send a song for the Own Americavision Song Contest. Each full member has got a certain broadcaster that is responsible for the choice of the artists and songs the country is sending for each edition.

Forty-eight countries have participated at least once. These are listed here alongside the edition in which they made their debut:

The contest's format has changed over the editions; the contest has two semi-finals and a final. The top ten scored countries from each semi-final advanced to the final. In the first edition, due to big number of participants there were thirteen qualifiers from each semi-final. For the next editions, the top 6 from each edition will be a part of the big 6.

Since the very first edition the winning country of each edition is automatically chosen to be the host of the next edition. As the host broadcaster, the heads of delegation can decide how and when they want to host the competition, present the logo, make a theme song and other things. However if a broadcaster cannot afford to host the competition, the runner-up or the council will help out. The show would still be hosted in the winning country. 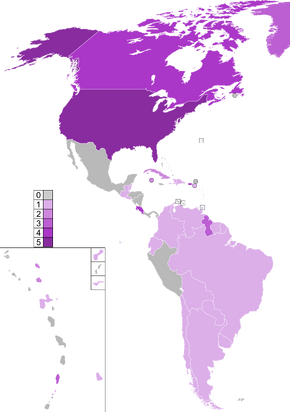 Map showing the "participation" of a country in the Big 6 up to the eleventh edition.

Since the introductions of the semi-finals in the first edition the six highest-placed countries in the grand final were guaranteed a place in the following edition's grand final, without having to qualify. The remaining countries had to enter the semi-final.

Members of the Big 6 through the editions have been several countries. Currently, United States holds the record of being in the Big 6 four times. The best place for a Big 6 member was the first place, achieved by Cayman Islands in the Own Americavision Song Contest 4 fourth edition with their first place.

There are several rules of the contest in order to enter. Main rule of the contest is that the country has to officially join the Own American Broadcasting Association with a certain broadcaster before applying to enter the contest. Regarding the broadcaster, any broadcaster can be accepted by the OABU. The head of delegation of the certain country must be at the position for at least three editions. If the head of delegation is not satisfied with the country, one can swap the countries with other users. There are also rules regarding the entries, such as that Wikipedia:Eurovision Song Contest songs are not allowed to compete in the contest or that the singer must be over the age of 16.

The voting system used in the contest has been in place since the beginning, and is a positional voting system. Each country awards one set of 12, 10, 8–1 points to their 10 favourite songs. In case of the country not being able to deliver the voting, back-up juries were used to replace it.

So far there has been no entry that received no points from any country.

There have been several ties during the contest. In case of a tie between two or more countries, the country that received points from the most countries wins the tie. However, if the countries received points from the same number of countries, the number of 12 points is counted and if they are still tied it goes on until the tie breaks. The first notable and controversial tie in the contest was the one between Brazil and United States Virgin Islands in the ninth edition where Brazil came 10th and United States Virgin Islands 11th in semi-final making only the first to qualify.