Thirty-seven countries participated in the first edition. Bahamas was also expected to take part in the contest, but they missed the submission deadline and therefore could not take part. The participating countries competed in two semi-finals.

The winner was Antigua and Barbuda with the song "Kicks" by Au/Ra which scored 164 points, winning by a margin of 13 points in front of Trinidad and Tobago. The podium was completed by Uruguay, which finished on the third place. Peru, the host country placed fourteenth.

For more details on the host country, see Peru. 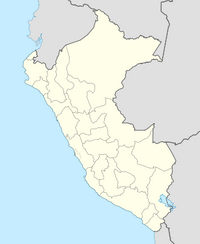 Lima
Location of the host city.
Lima is the capital and the largest city of Peru. It is located in the valleys of the Chillón, Rímac and Lurín rivers, in the central coastal part of the country, overlooking the Pacific Ocean. Together with the seaport of Callao, it forms a contiguous urban area known as the Lima Metropolitan Area. With a population of almost 10 million, Lima is the most populous metropolitan area of Peru and the third-largest city in the Americas (as defined by "city proper"), behind São Paulo and Mexico City.

Coliseo Amauta is the biggest multi-use indoor arena in Peru, located in the southern zone of the Lima District in Lima, Peru. The arena has a capacity for 20,000 people, which can vary depending on use. It originally opened in 1968.

The arena hosts sport events as basketball and volleyball. Today it is used for evangelic events and also to host circus during July.

The semifinal allocation draw took place on May 6, 2017.

The participating countries, will be split into six pots, based on geographical position. The pots were calculated and are as follows:

From these pots, 19 countries were allocated to compete in the first semi-final and 18 in the second semifinal.

Twenty-six countries participated in the final, with all 37 participating countries eligible to vote.

Retrieved from "https://ownesc.fandom.com/wiki/Own_Americavision_Song_Contest_1?oldid=89975"
Community content is available under CC-BY-SA unless otherwise noted.