Own Americavision Song Contest 6, often referred to as OAmSC #6, is the 6th edition of Own Americavision Song Contest. The contest took place in San Salvador, El Salvador, following the country's victory in the 5th edition with the song "Wild Heart", performed by Sabi. The contest was held at the Gimnasio Nacional José Adolfo Pineda, and consisted of one final. This is the first time that the country hosted the contest.

The winner was Guyana with the song "Wolf" performed by Sabiyha - this being country's first victory in the competition. It received a total amount of 133 points, the second smallest amount of points achieved by a winner at this point. The runner-up was Guadeloupe, marking country's first ever top 5 and best result. Third place went to Greenland, which is also tied with their best result from the second edition. Saint Vincent and the Grenadines and Curaçao, on the fourth and eight places also tied with their previous best placement, while United States Virgin Islands, Dominica and Martinique achieved their highest placing in their contest history. United States and Antigua and Barbuda scored their worst result to date, the later one finishing in the last place. This edition also marked the first appearance of Dominica and Martinique in the final.

For more details on the host country, see El Salvador. 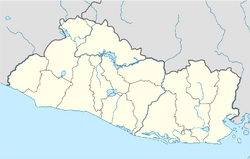 San Salvador ("Holy Savior") is the capital and the most populous city of El Salvador and its eponymous department. It is the country's political, cultural, educational and financial center. The Metropolitan Area of San Salvador which comprises the capital itself and 13 of its municipalities has a population of 2,404,097.

As a "beta" global city, San Salvador is also an important financial hub of Central America. The city is home to the Concejo de Ministros de El Salvador (Council of Ministries of El Salvador), La Asamblea Legislativa (The Legislative Assembly of El Salvador), the Corte Suprema de Justicia (The Supreme Court), and other governmental institutions, as well as the official residence of the president of the Republic. San Salvador is located in the Salvadoran highlands, surrounded by volcanoes and prone to earthquakes. The city is also home to the Catholic Archdiocese, as well as many Protestant branches of Christianity, including Evangelicals, Latter-day Saints, Baptists, and Pentecostals. San Salvador has the second largest Jewish community in Central America and a small Muslim community.

Gimnasio Nacional José Adolfo Pineda (known as the National Gymnasium in some English sources) is an indoor sporting arena located in San Salvador, El Salvador. The capacity of the arena is 12,500 spectators. It is mainly used to host basketball and other indoor sporting events. It also hosted the Miss Universe 1975 competition on CBS with Bob Barker.

Built between 1950 and 1956, named after basketball player José Adolfo "Chorro de Humo" Pineda; a noticeable character who led the national salvadorean basketball team to win the gold in the VIII Juegos Centroamericanos y del Caribe in 1959.