Own Americavision Song Contest 7, often referred to as OAmSC #7, is the 7th edition of Own Americavision Song Contest. The contest took place in Georgetown, Guyana, following the country's victory in the 6th edition with the song "Wolf", performed by Sabiyha. The contest was held at the Providence Stadium, and consisted of two semi-finals and the final. This is the first time that the country hosted the contest.

Thirty-four countries participated in the contest. The contest saw the return of Argentina, Brazil, Chile, Cuba, Haiti, Honduras, Panama, Uruguay and Venezuela, while Bahamas, Bolivia, Guatemala, Saint Kitts and Nevis and Trinidad and Tobago have withdrawn from the competition.

The winner was Cuba with the song "Mama Mia" performed by Mayra Verónica, which received a record-breaking 221 points, managing to receive the highest "12 points" from eleven countries, and with a margin of 93 points over the second place which went to El Salvador. This is also the biggest margin between the winner and the runner-up to date. The podium was completed by Puerto Rico, followed by Haiti on the fourth place, both achieving their best result ever. The countries who also achieved their best result were Ecuador, who ended up on the sixth place, Martinique on the eighth place and French Guiana on the fourteenth place. Out of the "Big Six" countries, the host nation Guyana managed to finish on the tenth place, this also being the best scoring automatic qualifier of the edition.

For more details on the host country, see Guyana. 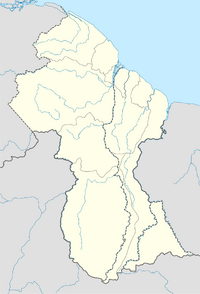 Georgetown
Location of the host city.

Georgetown is a city and the capital of Guyana, located in Region 4, which is also known as the Demerara-Mahaica region. It is the country's largest urban centre. It is situated on the Atlantic Ocean coast at the mouth of the Demerara River and it was nicknamed the 'Garden City of the Caribbean. Georgetown serves primarily as a retail and administrative centre. It also serves as a financial services centre. The city recorded a population of 200,500 in the 2016 census.

Georgetown is the seat of the central Government of Guyana. All executive departments are located in the city. Parliament Building, Guyana's Legislative Building, is also found in Georgetown and so is the Court of Appeals, Guyana's highest judicial court. The State House (the official residence of the head of state), as well as the offices and residence of the head of government, are both located in the city. Georgetown is the capital city as well as the main economic base of Guyana.

The Providence Stadium or Guyana National Stadium is a sports stadium in Guyana, replacing Bourda as the national stadium. The stadium was built specifically to host Super Eight matches in the 2007 Cricket World Cup held in March and April 2007. The stadium hosted six World Cup matches between March 28, 2007 and April 9, 2007. Built primarily for cricket matches, the stadium can be converted into a multi-use facility.

The stadium was built by the Government of Guyana with substantial financial assistance from the Government of India. It was designed by C.R. Narayana Rao (CRN Architects & Engineers) and constructed by Shapoorji Pallonji Group. Flooding in 2005 slowed site preparation, and delayed the start of construction, which began in May 2005. Construction costs are estimated at $25,000,000 US.

Seating 15,000 people, Providence Stadium is one of the largest sports arenas in Guyana, and now hosts test cricket instead of Bourda. The complex includes a shopping mall and luxury apartments. Princess International Hotel is located next to the stadium. It is located on the east bank of the Demerara River a few kilometres south of the Guyanese capital, Georgetown. Located along the East Bank Highway the stadium is a ten-minute drive from Georgetown's city centre and a 30-minute drive from Cheddi Jagan International Airport.

The twenty-eight semi-finalists were allocated into six pots, based on their geographical place and cultural similarities. Drawing from different pots helps in reducing the chance of so-called neighbour voting and increasing suspense in the semi-finals. Each time a country was drawn from the pot, its semi-final and half of the semi-final was determined.

Fourteen countries participated in the first semi-final. Guadeloupe, Guyana and Saint Vincent and the Grenadines also voted in this semi-final.

Twenty-six countries participated in the final, with all 34 participating countries eligible to vote.