The event took place on 12 December 2020. Twenty seven countries broadcasted the event and participated in the voting. Also for the first time in the Own Americavision Song Contest Winners Edition, the rest of the world voting was used.

Further information on the host country: Saint Vincent and the Grenadines

The hosting submissions started on 23 November 2020. Five countries applied to host the event: Belize, Greenland, Northern Mariana Islands, Saint Lucia and Saint Vincent and the Grenadines. Bids from Curaçao and Sint Maarten were also expected, however the broadcasters did not apply.

The host was selected through a poll. After some days of voting, Saint Vincent and the Grenadines was selected as the host of the event with 40% of the votes. 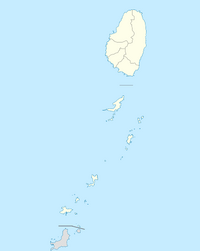 Kingstown
Location of the host city.

Kingstown is the capital, chief port, and main commercial centre of Saint Vincent and the Grenadines. With a population of 16,500 (2010), Kingstown is the most populous settlement in the country. It is the centre for the island's agricultural industry and a port of entry for tourists. The city lies within the parish of Saint George in the south-west corner of Saint Vincent.

The modern capital, Kingstown, was founded by French settlers shortly after 1722, although Saint Vincent had 196 years of British rule before its independence.

The botanical garden, conceived in 1765, is one of the oldest in the Western hemisphere. William Bligh, made famous from the Mutiny on the Bounty, brought seed of the Breadfruit tree here for planting, circa 1793.

The St. Vincent Memorial Hall, better known as the Peace Memorial Hall is located at Richmond Hill in the vicinity of the UWI School of Continuing Studies. Peace Memorial Hall was rebuilt in 2002 as the main cultural centre in Kingstown. It is managed by a board and is expected to be self-sustaining by its activities.

Twenty Seven countries from all of the Americas broadcasted the event and participated in the voting. The participating countries were: