The Own Asiavision Song Contest, often shortened to OASC is a song contest on Youtube held, primarily, among the member countries of the Own Asia-Pacific Broadcasting Union since April 2015. The competition is based upon the existing Eurovision Song Contest held among the member countries of the European Broadcasting Union (EBU) since 1956. The current and official executive supervisor is Mihai Ghetiu.

South Korea hold the record for the highest number of wins, having won the contest four times each in the fifth, ninth, twenty-first and twenty-third editions. The highest scoring winner is Munisa Rizaeva of Uzbekistan who won the twenty-second edition with her song "Bir nima de" which got 248 points, 60 points ahead the runner-up.

The first contest was won by China.

Main article: List of countries in the Own Asiavision Song Contest

Any full member of the Own Asia-Pacific Broadcasting Union is allowed to send a song for the Own Asiavision Song Contest. Each full member has got a certain broadcaster that is responsible for the choice of the artists and songs the country is sending for each edition.

54 countries have participated at least once. These are listed here alongside the edition in which they made their debut:

The contest's format has changed over the editions; from one final the contest evolved into two semi-finals and a final. The top ten scored countries from each semi-final advanced to the final. In the first nine editions, due to low number of participants there was just one final. However, for the next editions, this would change to big 6 and the top 6 from each edition will be a part of the big 6.

Since the very first edition the winning country of each edition is automatically chosen to be the host of the next edition. As the host broadcaster, the heads of delegation can decide how and when they want to host the competition, present the logo, make a theme song and other things. However if a broadcaster cannot afford to host the competition, the runner-up or the council will help out. The show would still be hosted in the winning country. 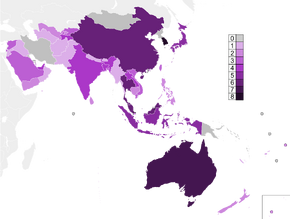 Map showing the "participation" of a country in the Big 6 up to the twenty-sixth edition.

Since the introductions of the semi-final in the tenth edition the ten highest-placed countries in the grand final were guaranteed a place in the following edition's grand final, without having to qualify. The remaining countries had to enter the semi-final.

With still more nations entering, starting from the fourteenth edition onwards two semi-finals would be held, from each of which one could qualify for the final.

Members of the Big 6 through the editions have been several countries. Currently, Malaysia holds the record of being in the Big 6 five times. The best place for a Big 6 member was the first place, achieved by Malaysia in the thirteenth edition with their first place.

There are several rules of the contest in order to enter. Main rule of the contest is that the country has to officially join the Own Asia-Pacific Broadcasting Union with a certain broadcaster before applying to enter the contest. Regarding the broadcaster, any broadcaster can be accepted by the OABU. The head of delegation of the certain country must be at the position for at least three editions. If the head of delegation is not satisfied with the country, one can swap the countries with other users. There are also rules regarding the entries, such as that Eurovision Song Contest songs are not allowed to compete in the contest or that the singer must be over the age of 16.

The voting system used in the contest has been in place since the beginning, and is a positional voting system. Each country awards one set of 12, 10, 8–1 points to their 10 favourite songs. In case of the country not being able to deliver the voting, back-up juries were used to replace it.

From first to sixth edition, the results were made in a Scorewiz–themed scoreboard with the countries announcing one by one point. From Own Asiavision Song Contest 7, the announcements have been evolving visually and the results were announced from last to first places, with the current announced entry being played.

Although it is almost impossible for a country to receive nul points, there has so far been one entry that received no points from any country. The only entry to have received no points so far is East Timorese entry for the twenty-forth edition.

There have been several ties during the contest. In case of a tie between two or more countries, the country that received points from the most countries wins the tie. However, if the countries received points from the same number of countries, the number of 12 points is counted and if they are still tied it goes on until the tie breaks. The first notable and controversial tie in the contest was the one between Papua New Guinea and Turkmenistan in the twelfth edition where Papua New Guinea came 15th and Turkmenistan 16th in semi-final making only the first to qualify. Other notable tie include the one between Qatar and Iran in the sixteeenth edition, making only the first to qualify.

The contest has so far nineteen different winning countries. South Korea hold the record for the highest number of wins, having won the contest three times.

Afghanistan, Singapore and Vietnam are the countries with the most second places so far, with Afghanistan ending up as the runner-up in the fourth and tenth editions, Singapore in the fifth and seventeenth editions and Vietnam in the third and twentieth editions. Uzbekistan's winning entry currently holds the record for the highest scoring winner, while Yemen's winning entry holds the record for the biggest margin between the winner and the runner-up. South Korea became the first country to win more times.