Thirty-five countries participated in the eleventh edition. The winner was Sri Lanka with the song "In the Moment" by We Are Twin which scored 175 points, winning by a margin of 39 points in front of Macau. The podium was completed by Japan, which finished on the third place. Qatar, the host country placed 22nd.

For more details on the host country, see Qatar. 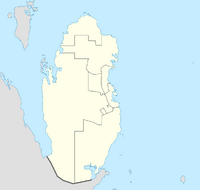 Doha
Location of the host city.

Doha is the capital city and most populous city of the State of Qatar. Doha has a population of 1,351,000 in a city proper with the population close to 1.5 million. The city is located on the coast of the Persian Gulf in the east of the country. It is Qatar's fastest growing city, with over 50% of the nation's population living in Doha or its surrounding suburbs, and it is also the economic center of the country.

In May 2015, Doha was officially recognized as one of the New7Wonders Cities together with Vigan, La Paz, Durban, Havana, Beirut, and Kuala Lumpur.

Lusail Sports Arena is an indoor sports arena in Qatar. It has a capacity of 15,300. The arena was also built to host matches of the 2015 World Men's Handball Championship. It is rated with 3 GSAS Stars (Global Sustainability Assessment System) for its design.

As per the initial plans, it was supposed to accommodate approx. 18.000 spectators, however, the will of the Qatar Olympic Committee, to create a venue that would primarily provide comfort to the visitors, led to the decision for more spacious seats transforming it into one of the most “spectator-friendly” venues in the world.

Twenty-four countries participated in the final, with all the participating countries eligible to vote.