Own Asiavision Song Contest 19, often referred to as OASC #19, was the 19th edition of Own Asiavision Song Contest. The contest took place in Phnom Penh, Cambodia, following the country's victory in the 18th edition with the song "Beautiful Art", performed by Nikki Nikki. The contest was held at the National Olympic Stadium, and consisted of two semi-finals and the final. This is the first time that the country hosted the contest.

Thirty-six countries participated in the nineteenth edition. The contest saw the return of Hong Kong, Saudi Arabia and South Korea. Unfortunately, Jordan, Kuwait, New Zealand, Oman, Singapore, Tajikistan and Vietnam have withdrawn from the competition. Despite originally confirming, East Timor and Kyrgyzstan were forced to withdraw due to not submitting an entry before the deadline.

The winner was Laos with the song "Higher" performed by The Naked and Famous. This was country's first qualification since the introduction of the semi-finals. The top three countries – Laos, Thailand and Nepal – achieved the highest placing in their contest history, along with Samoa coming on fourteenth place. Out of the "Big Six" countries, only Indonesia finished in top 10, coming seventh, with the same amount of points as in the last edition. Myanmar finished in the last place, this being the third time in a row when a pre-qualified country is ranked last. For the first time since the introduction of the semi-finals, Taiwan failed to qualify for the final.

For more details on the host country, see Cambodia. 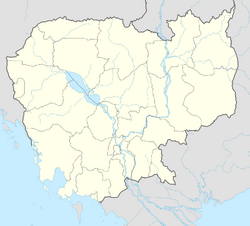 Phnom Penh, formerly known as Krong Chaktomuk or Krong Chaktomuk Serimongkul, is the capital and most populous city in Cambodia. Phnom Penh has been the national capital since French colonization of Cambodia, and has grown to become the nation's economic, industrial, and cultural center. Once known as the "Pearl of Asia," it was considered one of the loveliest French-built cities in Indochina in the 1920s. Phnom Penh, along with Siem Reap and Sihanoukville, are significant global and domestic tourist destinations for Cambodia. Founded in 1434, the city is noted for its beautiful and historical architecture and attractions. There are a number of surviving French colonial buildings scattered along the grand boulevards.

Situated on the banks of the Tonlé Sap, Mekong and Bassac rivers, the Phnom Penh metropolitan area is home to about 1.5 million of Cambodia's population of over 14.8 million.

The National Olympic Stadium is a multi-purpose stadium in Phnom Penh, Cambodia. It has a capacity of 50,000. Despite its name, the stadium has never hosted an Olympic Games.

Construction on the National Sports Complex started in 1963 and was completed in 1964. Designer Vann Molyvann made use of massive earthworks to create the stadium, digging up 500,000 cubic meters of earth to shape the grounds.

During the Khmer Rouge era, the stadium was used as an execution site where officials of the Khmer Republic formerly led by Lon Nol were killed.

In the decades following the Khmer Rouge era, the stadium facilities fell into disrepair. In 2000, the stadium complex was redeveloped by a Taiwanese firm, the Yuanta Group, which refurbished the stadium but also redeveloped parcels of the complex into condominiums and commercial properties.

The stadium has come to be a popular attraction for Phnom Penh residents, who attend daily exercise sessions, as well as football games and other activities.

The thirty semi-finalists were allocated into six pots, based on their geographical place and cultural similarities. Drawing from different pots helps in reducing the chance of so-called neighbour voting and increasing suspense in the semi-finals. Each time a country was drawn from the pot, its semi-final and half of the semi-final was determined.

Fifteen countries participated in the first semi-final. Australia, Cambodia and Palestine also voted in this semi-final.

Fifteen countries participated in the second semi-final. Bangladesh, Indonesia and Myanmar also voted in this semi-final.

Twenty-six countries participated in the final, with all 36 participating countries eligible to vote.