Own Asiavision Song Contest 24, often referred to as OASC #24, is the 24th edition of Own Asiavision Song Contest. It took place in Daegu, South Korea, following Dreamcatcher's win in the 23rd edition with the song "Scream". It was the fourth time South Korea had hosted the contest, having previously done so in the sixth, tenth and twenty-second editions. Organised by the Own Asia-Pacific Broadcasting Union and host broadcaster Korean Broadcasting System, the contest was held at the Daegu Stadium, and consisted of one quarter-final, two semi-finals and the final. The four live shows were hosted by Chung Ha.

A record of fifty-three countries participated in the contest. Kiribati made its debut this edition. Bangladesh, East Timor, Iraq, Maldives, Pakistan, Solomon Islands and Vanuatu returned to the competition. For the first time no country withdrew. Following the high number of countries that wished to compete in the contest, the OABU introduced the quarter-final in which the bottom five entries from each of the two semifinals from the previous edition competed, in order to qualify for the semifinals.

The winner was Taiwan with the song "Limelights" performed by G5SH feat. Lily. This was country's second victory, the last one being in the 8th edition. The podium was completed by Indonesia, which managed to equal their best result achieved two editions ago, and Tajikistan. Thailand, New Caledonia, which achieved its best result, and Laos rounded up the top 6. Kuwait managed to beat their best result from the previous edition, placing ninth, this being the first time that the country is in top 10. Solomon Islands also achieved their best result to date, placing 13th. The host nation South Korea finished on the 10th place. The edition marked the first time that Malaysia, New Zealand, Vanuatu, and Vietnam failed to qualify for the final. East Timor became the first country to score no points, receiving nul points in the first semi-final. 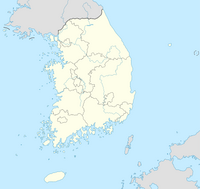 Daegu
Location of the host city.
Daegu formerly spelled Taegu and officially known as the Daegu Metropolitan City, is a city in South Korea, the fourth-largest after Seoul, Busan, and Incheon and the third-largest metropolitan area in the nation with over 2.5 million residents. Also, it is the second largest city in the Yeongnam region after Busan. However, it is the fourth city in terms of population after Seoul, Busan and Incheon. It was overtaken by Incheon in the 2000s, but still it is said to be the third city according to the "Act on the Establishment of Daegu City and Incheon City". Daegu and surrounding North Gyeongsang Province are often referred to as Daegu-Gyeongbuk, with a total population over 5 million.

Daegu was an economic motor of Korea during the 1960s–1980s period and was especially known for its electronics industry. The humid subtropical climate of Daegu is ideal for producing high-quality apples, thus the nickname, "Apple City". Daegu is also known as "Textile City". Textiles used to be the pillar industry of the city. With the establishment of the Daegu-Gyeongbuk Free Economic Zone, Daegu is currently focusing on fostering fashion and high-tech industries.

Daegu Stadium also known as the Blue Arc, is a sports stadium located in Daegu, South Korea. It was formerly named Daegu World Cup Stadium but was changed to Daegu Stadium on 5 March 2008. It has a seating capacity for 66,422 people, and parking for 3,550 cars. It is located approximately 11 kilometers or 20 minutes by car from Daegu Airport. It is managed by the Daegu Sports Facilities Management Center.

It was one of the host venues of the 2002 FIFA World Cup and the main stadium for the 2003 Summer Universiade and the 2011 World Championships in Athletics. It was the home stadium of Daegu FC until 2018.

Twenty-six countries participated in the final, with all 53 participating countries eligible to vote.

Further information: List of countries in the Own Asiavision Song Contest
Eligibility for potential participation in the Own Asiavision Song Contest requires a national broadcaster with active OABU membership that would be able to broadcast the contest. As in every edition, an invitation to all the members has been sent in order to confirm whether they will participate or not.

Retrieved from "https://ownesc.fandom.com/wiki/Own_Asiavision_Song_Contest_24?oldid=90072"
Community content is available under CC-BY-SA unless otherwise noted.