Own Asiavision Song Contest 27, often referred to as OASC #27, is the 27th edition of Own Asiavision Song Contest. The contest took place in Nadi, Fiji, following the country's victory in the 26th edition with the song "Happy Hour" by Rosette. It was be the second time that Fiji had hosted the contest, having previously done so for the eighth edition. Organised by the Own Asia-Pacific Broadcasting Union and host broadcaster Fiji Television, the contest was held at the Prince Charles Park and Denarau Island Resort, and consisted of one quarter-final, two semi-finals and the final. The three live shows were hosted by Palini and Rosette.

The winner was Tajikistan with the song "Nedoslavyanka" performed by Manizha. This was country's first victory in the contest. Tajikistan became the second Central Asian country to win the contest after Uzbekistan in the twenty-second edition. The podium was completed by Philippines and Jordan. Bangladesh, Samoa and India rounded up the top 6. Christmas Island, which scored 17th achieved their best result to date. The host nation Fiji finished pre-last. 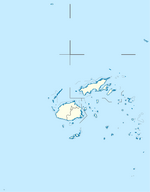 Nadi
Location of the host city.

Nadi is the third-largest conurbation in Fiji. It is located on the western side of the main island of Viti Levu, and had a population of 42,284 at the most recent census, in 2007. A 2012 estimate showed that the population had grown to over 50,000. Nadi is multiracial with many of its inhabitants Asians, Indian or Indigenous Fijians, along with a large transient population of foreign tourists. Along with sugar cane production, tourism is a mainstay of the local economy.

The Nadi region has a higher concentration of hotels and motels than any other part of Fiji. With its large Indo-Fijian population, Nadi is a centre for Hinduism and Islam in Fiji. It has the largest Hindu temple in the Southern hemisphere, and is a site for pilgrims called Sri Siva Subramaniya temple.

Nadi International Airport located 9 kilometres from the town, is the largest airport in Fiji. Thus, Nadi is the principal port of entry for air travellers to Fiji, even though it is on the opposite (western) side of the island of Viti Levu from the nation's capital and largest city, Suva.

Nadi has a tropical monsoon climate according to the Köppen climate classification, with hot temperatures year round. The city features a short dry season during the months of July and August, and a lengthy wet season covering the remaining months of the year. It receives substantially less precipitation than Suva on the windward side of Fiji.

Prince Charles Park is a stadium in Nadi, Fiji. The stadium has a nominal capacity of 18,000 people.

The park is home to the Nadi Rugby Union and Nadi Football Association. Govind Park has also hosted many international matches with teams from all continents. It has also hosted local football tournaments like the Fiji Fact, Battle of the Giants, and Inter District Championship. The ground is managed by the Nadi Town Council. Plans are underway to expand the nominal capacity to 30,000, making it the largest stadium in the Fiji Islands.

Denarau Island is a small private resort development on the western side of Viti Levu in the Republic of Fiji. The 2.55 km2 resort is reached via a short causeway over a creek and is located 5 km north west of the town Nadi and 10 km west of Nadi International Airport.

Denarau is known for its hotels and resorts, with the 18-hole Denarau Golf course as its centrepiece. The development includes international chains such as Hilton, Sheraton, Radisson, Westin, Sofitel and Wyndham (formerly Worldmark).

Denarau Marina is located in Denarau Island and provides sea transfer services to the island chains of the Mamanucas and the Yasawas.

Port Denarau, as well as containing Denarau Marina, is a shopping precinct with a variety of restaurants, a supermarket, bakery, hairdressers and tour operators.

Twenty-one countries participated in the first semi-final. Fiji, Syria and Thailand also voted in this semi-final.

Twenty-one countries participated in the first semi-final. Bahrain, China and Taiwan also voted in this semi-final.

Twenty-six countries participated in the final, with all 48 participating countries eligible to vote.