The event took place on 29 June 2019. Twenty-one countries broadcasted the event and participated in the voting. Also for the first time in the Own Asiavision Song Contest Winners Edition, the rest of the world voting was used.

For more details on the host country, see North Korea.

Ryugyong Chung Ju-yung Gymnasium, also known as Pyongyang Arena, is an indoor sporting arena located in Pyongyang, North Korea. The capacity of the arena is 12,309 and was built in 2003. It is used to host indoor sporting events, such as basketball and volleyball as well as concerts and art performances.

The hosting submissions started on 9 June 2019. 5 countries applied to host the event. The host was selected through a poll. After some days of voting, North Korea was selected as the host of the event with 40,74% of the votes. 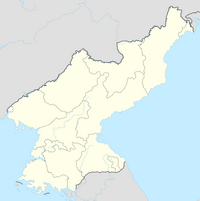 Pyongyang
Location of the host city.

Pyongyang is the capital and largest city of North Korea. Pyongyang is located on the Taedong River about 109 kilometres upstream from its mouth on the Yellow Sea. According to the 2008 population census, it has a population of 3,255,288. Pyongyang is a directly-administered city with equal status to North Korean provinces.

Pyongyang is considered one of the oldest cities in Korea. It was the capital of two ancient Korean kingdoms, including Gojoseon and Goguryeo, and served as the secondary capital of Goryeo. Much of the city was destroyed during the First Sino-Japanese War, but it was revived under Japanese rule and became an industrial center. Following the establishment of North Korea in 1948, Pyongyang became its de facto capital. The city was again devastated during the Korean War, but was quickly rebuilt after the war with Soviet assistance.

Pyongyang is the political, industrial and transport center of North Korea. It is home to North Korea's major government institutions, as well as the ruling Workers' Party of Korea.