A record of fifty-two countries wishes to participate in this edition. To accommodate the increasing number of countries, a new rule will be introduced: the countries will battle in three semi-finals to reach the grand final. That means, only seven countries, from each semi-final, will qualify for the Grand Final.

The Netherlands, host country, Malta, Denmark, Belgium and Moldova, being Top 5 from last edition, also known as the Big 5, will automatically qualify for the final.

The contest was won by Andorra's Pastora Soler and David Bustamante and their song "Bandera blanca", which received 183 points, winning with a margin of only one point. Andorra's win was their first. The runner-up was Libya, scoring second on their debut. Third place went to Greenland, fourth to Malta and Wales taking the 5th place. The host country, The Netherlands manage to make it in the first part of the leaderboard , finishing on 7th place receiving 146 points.

Amsterdam Arena is a stadium in Amsterdam, Netherlands. It is the largest stadium in the country and it was built from 1993 to 1996 at a cost of €140 million, and was officially opened on 14 August 1996. It has been used for association football, American football, concerts, and other events. The stadium has a retractable roof combined with a grass surface. It has a capacity of 53,052 seats during football matches and 68,000 places during concerts if a centre-stage setup is used (the stage in the middle of the pitch); for end-stage concerts, the capacity is 50,000, and for concerts where the stage is located in the east side of the stadium, the capacity is 35,000. It held UEFA five-star stadium status which was superseded by a new system of classification. On 15 May 2013, the Amsterdam Arena hosted the 2013 UEFA Europa League Final between S.L. Benfica and Chelsea F.C. which Chelsea won 2-1.

The stadium is the home of the association football club AFC Ajax (1996–present) and was the home of the now-defunct American football club Amsterdam Admirals (1996–2007). It was one of the stadiums used during Euro 2000. Both international and Dutch artists gave concerts in the ArenA, including Celine Dion, Madonna, Michael Jackson, André Hazes and The Rolling Stones. Dance event Sensation is held in the stadium every year. 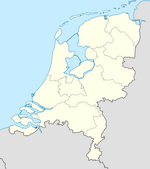 Amsterdam
Location of the host city in The Netherlands.

Amsterdam is the capital and most populous city of the Netherlands. Its status as the Dutch capital is mandated by the Constitution of the Netherlands, although Amsterdam is not the seat of the Dutch government which is The Hague. Amsterdam has a population of 801,200 within city limits, 1,557,905 in the urban region and 2,332,839 in the greater metropolitan area. The city is located in the province of North Holland in the west of the country. It comprises much of the northern part of the Randstad, one of the larger conurbations in Europe, with a population of approximately 7 million.

Amsterdam's name derives from Amstelredamme, indicative of the city's origin: a dam in the river Amstel. Originating as a small fishing village in the late 12th century, Amsterdam became one of the most important ports in the world during the Dutch Golden Age, a result of its innovative developments in trade. During that time, the city was the leading center for finance and diamonds. In the 19th and 20th centuries, the city expanded, and many new neighborhoods and suburbs were planned and built. The 17th-century canals of Amsterdam (in Dutch: 'grachtengordel'), located in the heart of Amsterdam, were added to the UNESCO World Heritage List in July 2010.

As the commercial capital of the Netherlands and one of the top financial centres in Europe, Amsterdam is considered an alpha world city by the Globalization and World Cities (GaWC) study group. The city is also the cultural capital of the Netherlands. Many large Dutch institutions have their headquarters there, and 7 of the world's top 500 companies, including Philips and ING, are based in the city. In 2012, Amsterdam was ranked 2nd best city to live by the Economist Intelligence Unit (EIU) and 12th globally on quality of living by Mercer. The city was previously ranked 3rd in innovation by 2th in know in the Innovation Cities Index 2009.

This is the first time, so far, the contest is held in Amsterdam, The Netherlands.

On 28 September 2012, the allocation draw to determine the semi-final running order was held .

On 5 October 2012, the allocation draw to determine the final running order was held.

On the 3rd of October 2012, the seven countries that have qualified to the final were revealed.

On the 4th of October 2012 the qualified countries were revealed.

On the 5th of October 2012, the seven qualified countries were revealed.

The twenty-six finalist are:

Three parts of the voting results will be shown:

51 out of 52 countries have voted in the Grand Final.

Portugal didn't vote in the Grand Final. The order was used to add as much excitement as possible. The spokespersons and the city from where they were calling, were shown alongside each country.