Nikki Ponte of Cyprus won the final with the song "Remembering the summer nights", receiving a total amount of 219 points. This was Cyprus's first ever win. The margin between first, second and third was only one point each. Second place was won by Algeria, followed by Russia on third place. Fourth place went to Andorra, while Denmark took the fifth place.

The host country, Germany manage to receive a total of 114 points, ending in the 14th place out of 28 countries.

O2 World is a multi-use indoor arena in the Friedrichshain neighborhood of Berlin, Germany, that opened in September 2008. Developed by Anschutz Entertainment Group, it was named O2 World, when O2 Germany purchased the naming rights. With a capacity of 17,000 people, it is home to the Eisbären Berlin ice hockey club and the ALBA Berlin basketball team, and is used for other ice hockey, basketball and handball matches as well as concerts. The surrounding area will be filled with various entertainment venues including a cinema, a casino, a hotel and various bars and restaurants. The arena hosted the 2008–09 Euroleague Final four. The arena was one of the most prominent elements of the Mediaspree urban redevelopment project, quickly gaining emblematic status in the debates surrounding the project's impact. 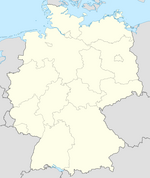 Berlin
Location of the host city in Germany.

Berlin is the capital city of Germany and one of the 16 states of Germany. With a population of 3.5 million people, Berlin is Germany's largest city and is the second most populous city proper and the seventh most populous urban area in the European Union. Located in northeastern Germany on the River Spree, it is the center of the Berlin-Brandenburg Metropolitan Region, which has about 4½ million residents from over 180 nations. Due to its location in the European Plain, Berlin is influenced by a temperate seasonal climate. Around one third of the city's area is composed of forests, parks, gardens, rivers and lakes.

First documented in the 13th century, Berlin was the capital of the Kingdom of Prussia (1701–1918), the German Empire (1871–1918), the Weimar Republic (1919–33) and the Third Reich (1933–45). Berlin in the 1920s was the third largest municipality in the world. After World War II, the city became divided into East Berlin—the capital of East Germany—and West Berlin, a West German exclave surrounded by the Berlin Wall from 1961–89. Following German reunification in 1990, the city regained its status as the capital of Germany, hosting 147 foreign embassies.

Berlin is a world city of culture, politics, media, and science. Its economy is primarily based on the service sector, encompassing a diverse range of creative industries, media corporations, and convention venues. Berlin also serves as a continental hub for air and rail transport, and is a popular tourist destination. Significant industries include IT, pharmaceuticals, biomedical engineering, biotechnology, electronics, traffic engineering, and renewable energy.

Berlin is home to renowned universities, research institutes, orchestras, museums, and celebrities, as well as host of many sporting events. Its urban settings and historical legacy have made it a popular location for international film productions.The city is well known for its festivals, diverse architecture, nightlife, contemporary arts, public transportation networks and a high quality of living.

This is the first time the contest is hosted in Germany.

Sixty countries have confirmed participation in the Own Eurovision Song Contest 15. The edition will see the debut of three countries, eleven countries returning and six countries withdrawing.

Egypt, Tajikistan and Turkmenistan made their debut in the Own Eurovision Song Contest. Algeria, Azerbaijan, Denmark, Greenland, Israel, Libya, Lithuania, Morocco, Switzerland, Tunisia and Turkey decided to return in the competition, while Bosnia and Herzegovina, Czech Republic, Faroe Islands, Scotland, Slovakia and Vatican City announced they will withdraw.

1.^Even though the title is in Armenian, the song is in English

The twenty-eight finalists are:

1.^Even though the title is in Armenian, the song is in English

Faroe Islands voted as a jury.