Fifty-seven countries decided to participate, with Kyrgyzstan making their debut in the contest, Greenland, Scotland and Switzerland returned in the contest and Azerbaijan, Egypt, Faroe Islands, Israel, Latvia, Lithuania, Slovakia and Uzbekistan have announced their withdrawal from the contest.

The contest was won by Liviu Hodor & Mona performing "Sweet love" for Romania. The runner up was Poland and Armenia finished in third place. They were followed by Russia who placed fourth. FYR Macedonia achieved its first top 5 placing, and finished fifth.

For the first time in the contest there were thirty countries in the Grand Final. The host country, Denmark failed to make it into the top half of the leader board, receiving 86 points placing 21st place .

Copenhagen Arena is an upcoming multi-use indoor arena in Ørestad Syd, a new development in the city of Copenhagen, Denmark. The ground is expected to be broken for construction mid-2013 with the arena to open in the autumn 2015. It will have a capacity of 12,500 for sporting events and up to 15,000 (either sitting or standing) for concerts.

The project was presented at a press conference at Bella Sky Hotel on 23 September 2011.

The design of the arena was presented on 7 June 2012. The winning design team consists of 3XN, HKS, Inc., Arup, ME Engineers and Planit. The arena will have a distinctly Nordic design.

In Copenhagen, the Parken Stadium, which is primary is a football stadium, is the largest indoor arena, with a seated capacity of 38,065. There is a lack of indoor areas with a capacity of 10,000-20,000 in the region. For most international sport events, the Brøndby Hall and Ballerup Super Arena are not big enough, while the Parken Stadium is too big. 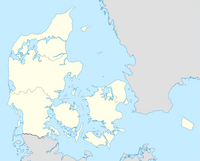 Copenhagen
Location of the host city in Denmark.

Copenhagen, the capital of Denmark is the host city for the seventeen edition of Own Eurovision Song Contest. The city its the most populous city, with an urban population of 1,213,822 (as of 1 January 2012) and a metropolitan population of 1,950,522 (as of 1 January 2013). Copenhagen is situated on the eastern coast of Zealand and stretches across part of Amager. A number of bridges and tunnels connect the parts of the city together, and the cityscape is characterised by promenades and waterfronts.

Originally a Viking fishing village founded in the 10th century, Copenhagen became the capital of Denmark in the beginning of the 15th century, while being documented as such since the 11th century. During the 17th century, under the reign of Christian IV, it became a significant regional centre. Since the turn of the millennium, Copenhagen has seen a strong urban and cultural development. This is partly due to massive investments in cultural facilities and infrastructure. Since the completion of the transnational Øresund Bridge in 2000, Copenhagen has become increasingly integrated in the Øresund Region. Within this region, Copenhagen and the Swedish city of Malmö are growing into a combined metropolitan area.

Copenhagen is a major regional centre of culture housing important, economic sectors such as biotechnology, information technology and shipping. Copenhagen is among the financial centres of Northern Europe with the Copenhagen Stock Exchange and home of many companies such as Maersk, Carlsberg Group and Novo Nordisk. Copenhagen has 89,000 students enrolled in its educational institutions.

A diverse infrastructure allows for a blend of bicycles, cars and public transport while the Copenhagen Metro serves the inner city centre, the S-train connects the city centre with the outer boroughs of Copenhagen. The Copenhagen Airport is largest airport in the Nordic countries, serving 23.3 million passengers in 2012

This is the second time that the contest is held in Denmark and the first time in the history of the contest, where the competition is hosted by the same city.

Voting during the final

All countries voted. Countries revealed their votes in the following order.

Retrieved from "https://ownesc.fandom.com/wiki/Own_Eurovision_Song_Contest_17?oldid=90022"
Community content is available under CC-BY-SA unless otherwise noted.