Sixty-four countries participated in the 21st edition, being the biggest number of participating countries in the contest until date. The Own Eurovision Song Contest 21 saw Algeria, Egypt, Jordan and Tunsia returning in the competition.

The contest was won by Romania's INNA and her song "More than friends", which received a record-breaking 263 points, the highest total score in Own Eurovision history, at the moment, wining with a margin of 74 points. Second place went to The Netherlands, third to Poland, fourth to Denmark and Andorra taking 5th. All countries from the top five have won the contest in the past. The host country, San Marino failed to make it in the first part of the leaderboard , finishing on the 28th place, receiving 61 points.

Stadio Olimpico is a multi-purpose stadium in Serravalle, San Marino. It is currently used mostly for football matches. It is the national stadium of San Marino, and is also used by the club San Marino Calcio, which plays in the Italian football league. The Stadio Olimpico was also used by Serravalle based football club A.C. Juvenes/Dogana for its home games in the Italian league, until the side withdrew to concentrate only on the Sanmarinese Championship. The Stadio Olimpico is an all-seater stadium and has a maximum capacity of 6,664. It has hosted teams such as England, Spain, Germany, and the Netherlands. The San Marino national team's two biggest defeats in the stadium are a record 13-0 to Germany in 2005 and more recently 8-0 to England in 2013. The national team's only win was also in this stadium; a friendly 1-0 beating of Liechtenstein in 2004. This stadium seats are in two stands along the lengths of the pitch and the highest ever capacities are in those same matches aginst Germany and England. 5,019 people saw them lose to Germany, and 4,952 saw them lose to England. San Marino's first official international match was a 4-0 defeat to Switzerland, which was also played here.

The stadium was first opened in 1969. It is also home to the youth teams of San Marino, some of which have worse records on the international stage than the senior team. San Marino Calcio, the Italian club, also play here. 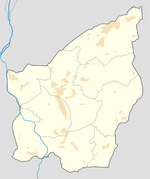 San Marino
Location of the host city in San Marino.

The city of San Marino, also known simply as San Marino, is the capital city of the Republic of San Marino on the Italian peninsula, near the Adriatic Sea. The city has a population of 4,493. It is on the western slopes of San Marino's highest point, Monte Titano.

The city was founded by Saint Marinus and several Christian refugees in the year 301. From then on the city became a center of Christian refugees who fled from Roman persecution. As a result, the city become the oldest republic in Europe, for the republic's territory at that time only included the single city of San Marino.

The urban heart of the city was protected by three towers: the first, Guaita, constructed in the 11th century, was famous for being impenetrable, which to a great extent discouraged attacks on the city.

Due to the Crusades, it was felt necessary to construct a second tower, Cesta (13th century). But the Sanmarinense defensive system was not completed until the construction of a third tower, the Montale (14th century) - the smallest of all and constructed on the last of the summits of Monte Titano.

With the population of the city increasing, the territory of the country was extended by a few square kilometers. Since the Sanmarinese policy was not to invade or to use war to obtain new territories, it was by means of purchases and treaties that San Marino obtained the other nine castelli which make up San Marino.

This was the first time the contest is held in San Marino.

The draw that determined the semi-final allocation was held on 15 July 2013 at the Stadio Olimpico.

The host country, San Marino will vote in all three semi-finals.

The running order of the Semi-Finals was revealed on July 17, 2013. Also, it was decided that San Marino will compete on spot number 21 in the Grand Final.

The running order of the Grand Final was revealed on July 26, 2013. The Final will see thirty countries, being the third time in the history of the contest.

1.^ The song is in English, however, the Spanish word is used in the song.
2.^ The country won a ticket to the Second Chance Round.

3.^ The country won a ticket to the Second Chance Round.

Notes
8. ^ Turkey was disqualified for not voting on time.

The order in which each country announced their votes was determined in a draw. Similar to the last editions an algorithm was used to generate as much suspense as possible. The spokespersons are shown alongside each country.

Sixty-two countries from sixty-four have sent their votes.

Marcel Bezençon Awards were given for the third time in this edition. The participants had to vote in several categories for the favorites. The categories were: best non-qualifier, heart winner, best non-english song, best female-singer, best male singer, best band, best video.