Own Eurovision Song Contest 23, often referred to as OESC #23, is the 23rd edition of Own Eurovision Song Contest. The contest will take place in the city of Pristina, Kosovo, after Miriam Cani and Alban Skënderaj won the previous contest hosted in Constanța, Romania with their song "Somebody hurts". The venue for the contest was announced on September 27, 2013, as the City Stadium from Pristina. This will be the first time the contest will take place in Kosovo.

Sixty-two countries have confirmed participation in the 23rd edition. This is the first time when 62 countries compete in the contest. The Own Eurovision Song Contest 23 will see Belarus, Faroe Islands, Montenegro and Scotland returning in the competition. San Marino and Slovakia have decided to withdraw.

Own Eurovision Song Contest 23 will see, again like last edition, thirty countries in the Grand Final, this is for the fifth time in the history of the contest. For the second time in a row, the host country didn't vote in all semi-finals.

The contest was won by Wales's Ellie Goulding and her song "Burn", which received 201 points, winning with a margin of 15 points. Wales's win was their first. The runner-up was Belarus, scoring their best position. Third place went to Romania, fourth to Scotland and Russia taking the 5th place. The host country, Kosovo succeded to make it in the first part of the leaderboard , finishing on 15th place, receiving 113 points.

The venue for the contest was announced on 27 September 2013 as Pristina City Stadium, which is a multi-purpose stadium in Pristina, Kosovo. It is currently used mostly for football matches and is the current home ground of KF Prishtina.

Pristina City Stadium (Albanian: Stadiumi i Qytetit, Serbian: Градски стадион, Gradski stadion) is a multi-purpose stadium in Pristina and one of the biggest stadiums in Kosovo. It is used mostly for football matches and is the home ground of KF Prishtina. The stadium holds 38,500 people, or 25,000 seated. It is also one of the two stadiums that have been picked for international matches.

In December 2007 it was the first time after the 1999 Kosovo War that the stadium was filled with 25,000 people and was host to a concert by the American rapper 50 Cent.

Kosovo is the subject of a territorial dispute between the Republic of Serbia and the self-proclaimed Republic of Kosovo. The latter declared independence on 17 February 2008, but Serbia continues to claim it as part of its own sovereign territory. Kosovo's independence has been recognised by 106 out of 193 United Nations member states. 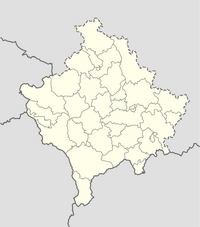 Pristina
Location of the host city in Kosovo.

Pristina, also spelled Prishtina and Priština (Albanian: Prishtinë or Prishtina; Serbian: Приштина or Priština; Turkish: Priştine), is the capital and largest city of Kosovo. It is the administrative center of the homonymous municipality and district.

Preliminary results of the 2011 census put the population of Pristina at 198,000. The city has a majority Albanian population, alongside other smaller communities including Bosniaks, Roma and others. It is the administrative, educational, and cultural center of Kosovo. The city is home to the Universiteti i Prishtinës and is served by the Pristina International Airport.

The name of the city is derived from a Slavic form *Prišьčь, a possessive adjective from the personal name *Prišьkъ, (preserved in the Kajkavian surname Prišek, in the Old Polish personal name Przyszek, and in the Polish surname Przyszek) and the derivational suffix -ina 'belonging to X and his kin'. The name is most likely a patronymic of the personal name *Prišь, preserved as a surname in Polish Przysz and Sorbian Priš, a hypocoristic of the Slavic personal name Pribyslavъ.A false etymology[citation needed] connects the name Priština with Serbo-Croatian prišt (пришт), meaning 'ulcer' or 'tumour', referring to its 'boiling'.However, this explanation cannot be correct, as Slavic place names ending in -ina corresponding to an adjective and/or name of an inhabitant lacking this suffix are built from personal names or denote a person and never derive, in these conditions, from common nouns (SNOJ 2007: loc. cit.). The inhabitants of this city call themselves Prishtinali in local Gheg Albanian or Prištevci (Приштевци) in the local Serbian dialect.

Pristina is located at the geographical coordinates 42° 40' 0" North and 21° 10' 0" East and covers 572 square kilometres (221 sq mi). It lies in the north-eastern part of Kosovo close to the Goljak mountains. From Pristina there is a good view of the Šar Mountains which lie several kilometres away in the south of Kosovo. Pristina is located beside two large towns, Obilić and Kosovo Polje. In fact Pristina has grown so much these past years that it has connected with Kosovo Polje. Lake Badovac is just a few kilometres to the south of the city.

There is no river passing through the city of Pristina now but there was one that passed through the center. The river flows through underground tunnels and is let out into the surface when it passes the city. The reason for covering the river was because the river passed by the local market and everyone dumped their waste there. This caused an awful smell and the river had to be covered.

The river now only flows through Pristina's suburbs in the north and in the south.

This will be the first time, the contest will take place in Kosovo.

The draw that determined the semi-final allocation was held on October 8, 2013 at the Pristina City Stadium.

The big 3 will vote as follow: Kosovo in the first semi-final, Åland Islands in the second semi-final and Italy in the third semi-final.

The running order of the Semi-Finals was revealed on October 8, 2013. Also, it was decided that the host country, Kosovo will compete on spot number 11 in the Grand Final, Italy on spot number 15 and Åland Islands will take the number 19.

The Grand Final running order was revealed on October 18, 2013.

The contest held in Pristina, Kosovo will not see San Marino and Slovakia competing, both countries deciding to withdraw.

The order in which each country announced their votes was determined in a draw. Similar to the last editions an algorithm was used to generate as much suspense as possible. The spokespersons are shown alongside each country. For the second time a public voting was used. Sixty sets of votes have been cast in the Grand Final.

Marcel Bezençon Awards were given for the fourth time in this edition. The participants had to vote in several categories for the favorites. The categories were: best non-qualifier, heart winner, best non-english song, best female-singer, best male singer, best band, best video.

Retrieved from "https://ownesc.fandom.com/wiki/Own_Eurovision_Song_Contest_23?oldid=90027"
Community content is available under CC-BY-SA unless otherwise noted.