Own Eurovision Song Contest 26, often referred to as OESC #26, is the 26th edition of Own Eurovision Song Contest. The contest will take place in the city of Vaduz, Liechtenstein, after Madeline Juno won the previous contest hosted in Mariehamn, Åland Islands with the song "Error". The venue for the contest was announced on January 10, 2014, as The Rheinpark Stadion from Vaduz.

A record of sixty-five countries have confirmed their participation in the contest. The 26th edition will see Belarus, Egypt, Hungary, Jordan, Latvia, Lithuania and Switzerland returning in the competition and Faroe Islands decided to withdraw.

Own Eurovision Song Contest 26 will see, again like previous editions, thirty countries in the Grand Final, this is for the eighth time in the history of the contest. For the fifth time in a row, the host country won't vote in all semi-finals.

The contest was won by Poland. Christina Perri and her song "Human" received 222 points, winning with a margin of 29 points. Poland's win was their second, the first win was back in the Own Eurovision Song Contest 12. The runner-up was Armenia. Third place went to The Netherlands, fourth to Scotland and Spain taking the 5th place.

Armenia and Åland Islands were the countries from "Big Three" which placed in the first half of the scoreboard. Out of 30 countries who made it into the final, the host country, Liechtenstein failed to make it into the top half of the leader board ending on the 28th position, receiving a total of 79 points.

The stadium was officially opened on 31 July 1998 with a match between FC Vaduz, the Liechtenstein Cup holders at the time, and 1. FC Kaiserslautern, the then Bundesliga champions. 1. FC Kaiserslautern won the match 8-0. It lies on the banks of the River Rhine, just metres from the border with Switzerland. The stadium has a fully seated capacity of 5,873. The stadium has additional standing places giving it a total capacity of 7,584. The building of the stadium cost roughly 19 million CHF.

English football club Liverpool played Olympiakos of Greece here in a pre-season friendly back in 2005. 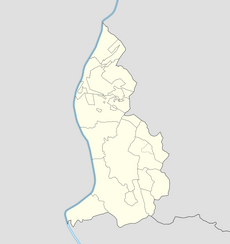 Vaduz
Location of the host city in Liechtenstein.

Although Vaduz is the best-known town internationally in the principality, it is not the largest: neighbouring Schaan has a larger population.

Vaduz is said to be mentioned in historic 12th-century manuscripts as Farduzes. It is, however, commonly believed to have been founded circa 1322 by the Counts of Werdenberg. In 1322 a mention of the castle is made, which was sacked by the Swiss in 1499 during the Swabian War. The entire town was also destroyed.

In the 17th century the Liechtenstein family was seeking a seat in the Imperial diet, the Reichstag. However, since they did not hold any territory that was directly under the Imperial throne, they were unable to meet the primary requirement to qualify.

The family yearned for the added power a seat in the Imperial government would bring, and therefore sought to acquire lands that would be Reichsunmittelbar, or held without any feudal personage other than the Holy Roman Emperor himself having rights on the land. After some time, the family was able to arrange the purchase of the minuscule Herrschaft ("Lordship") of Schellenberg and countship of Vaduz (in 1699 and 1712 respectively) from the Hohenems. Tiny Schellenberg and Vaduz possessed exactly the political status required: no feudal lord other than their comital sovereign and the suzerain Emperor.

Thereby, on January 23, 1719, after purchase had been duly made, Charles VI, Holy Roman Emperor, decreed Vaduz and Schellenberg were united, and raised to the dignity of Fürstentum (principality) with the name "Liechtenstein" in honour of "[his] true servant, Anton Florian of Liechtenstein". It is on this date that Liechtenstein became a sovereign member state of the Holy Roman Empire. As a testament to the pure political expediency of the purchases, the Princes of Liechtenstein did not set foot in their new principality for over 120 years.

The National Art Gallery as well as the National Museum are located in Vaduz. The art gallery (Kunstmuseum Liechtenstein) is a museum of modern and contemporary art, also showing displays from the private princely Liechtenstein Collection, the main public display of which is in Vienna. The building is an architectural landmark built by the Swiss architects Morger, Degelo and Kerez. It was completed in November 2000 and forms a “black box” of tinted concrete and black basalt stone. The museum collection is also the national art collection of Liechtenstein. The Liechtenstein National Museum is showing a permanent exhibition on the cultural and natural history of Liechtenstein as well as special exhibitions. There are also the Postage Stamp Museum and a Ski Museum.

Vaduz also has a local professional association football club, FC Vaduz which, as the other clubs in Liechtenstein, plays in the Swiss Football League. In the 2008–09 season, FC Vaduz became the first Liechtenstein club to play in the Swiss Super League, Switzerland's top flight. The club play at the 8,000-capacity Rheinpark Stadion, which also hosts the Liechtenstein national football team.

This is the first time the contest will take place in Liechtenstein.

The big 3 will vote as follow: Liechtenstein in the first semi-final, Armenia in the second semi-final and Åland Islands in the third semi-final.

1.^ Though the lyrics are in Romanian, the title of the song is in French.

64 sets of votes were used in the Grand Final in order to determine the winner.