Own Eurovision Song Contest 28, often referred to as OESC #28, is the 28th edition of Own Eurovision Song Contest. The contest will take place in the city of Algiers, Algeria, after Indila won the previous contest hosted in Kraków, Poland with the song "Dernière danse ". The venue for the contest was announced on 30 March, 2014 as the Baraki Stadium.

Sixty countries have confirmed their participation in the contest. This marks the fourth time in the history of the contest when 60 countries compete. The 28th edition will see Austria and Egypt returning in the competition. Estonia, Greenland, Jordan, Tunisia, Vatican City and Åland Islands decided to withdraw.

Own Eurovision Song Contest 28 will see, again like previous editions, thirty countries in the Grand Final, this is for the tenth time in the history of the contest. For the seventh time in a row, the host country won't vote in all semi-finals.

The contest was won by Azerbaijan's Laleh with her "Some die young", which received 224 points, by a margin of only 5 points. Azerbaijan's win was their first. Second place went to Sweden. Sweden's last top 5 was in the Own Eurovision Song Contest 12, contest held in Andorra. Third place went to Scotland, fourth to Israel and Norway taking the 5th. Israel's fourth place was their first top 4 ever achieved by the country.

Bulgaria was the single country from the "Big Three" countries which placed in the first half of the scoreboard, reaching 14th place. Out of 30 countries who made it into the final, the host country, Algeria ended on the 29th position, receiving a total of 50 points.

On March 30, 2014, Algerian public broadcaster, ENTV, announced that it had chosen the Baraki Stadium to be the venue of the Own Eurovision Song Contest 28.

Baraki Stadium is an indoor arena located in Algiers, Algeria that is under construction. It will have a seating capacity of 40,000 for sporting events and is expected to open in 2014.

The future Baraki Stadium will provide a number of Algiers football clubs, such as the NA Hussein Dey, CRB, USMA, MCA, RCK, OMR and USMH, with a major venue for national and international matches that is built to international standards. 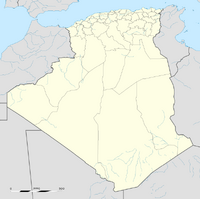 Sometimes nicknamed El-Behdja (البهجة) or alternatively Alger la Blanche ("Algiers the White") for the glistening white of its buildings as seen rising up from the sea, Algiers is situated on the west side of a bay of the Mediterranean Sea. The modern part of the city is built on the level ground by the seashore; the old part, the ancient city of the deys, climbs the steep hill behind the modern town and is crowned by the casbah or citadel, 122 metres (400 ft) above the sea. The casbah and the two quays form a triangle.

Some 20 km (12 mi) to the west of Algiers are such seaside resorts as Sidi Fredj (ex-Sidi Ferruch), Palm Beach, Douaouda, Zéralda, and the Club of the Pines (residence of State); there are tourist complexes, Algerian and other restaurants, souvenir shops, supervised beaches, and other amenities. The city is also equipped with important hotel complexes such as the hotel Hilton, El-Aurassi or El Djazair. Algiers also has the first water park in the country. The tourism of Algiers is growing but is not as developed as that of the larger cities in Morocco or Tunisia.

This is the first time the contest will be held in Algeria.

The draw that determined the semi-final allocation was held on April 10, 2014 at the Baraki Stadium. The participating countries, excluding the Big 3, were split into eight pots, based on voting history and geographical location. From these pots, 19 countries were allocated to compete in each of the three semifinals.

The big 3 will vote as follow: Algeria in the first semi-final, Andorra in the second semi-final and Bulgaria in the third semi-final.

The running order for the Grand Final was revealed on April 21, 2014.

Sixty countries have confirmed participation in the Own Eurovision Song Contest 28 with two countries returning and six withdrawing.

The Own Eurovision Song Contest 28 will see the return of Austria and Egypt, while Estonia, Greenland, Jordan, Tunisia, Vatican City and Åland Islands have decided to withdraw.

58 sets of votes were submitted in the Grand Final. Three countries didn't manage to vote , these countries were : Austria, Belgium and Switzerland.

Retrieved from "https://ownesc.fandom.com/wiki/Own_Eurovision_Song_Contest_28?oldid=90032"
Community content is available under CC-BY-SA unless otherwise noted.