It was announced during the meeting of the Head of Delegations that the dates for the three semi-finals are between 22 and 29 June 2014, with the final planned between 2 and 12 July 2014. This will be the first time Azerbaijan is hosting the contest. On 4 May 2014, it was confirmed that the Baku Crystal Hall would be the venue of the 29th edition. Also the slogan of the competition will be "Start a fire.".

Fifty-eight countries have confirmed their participation on the contest, this is the second time when this amount of countries have participated in the competition, last time being in the Own Eurovision Song Contest 18, contest held in Bucharest, Romania. The 29th edition will see the return of Greenland and Tunisia after an one-edition absence. Four countries have decided to withdraw, respectively Austria, Germany, Switzerland and Syria.

The contest was won by Northern Ireland. Ella Henderson with her song "Ghost", received a total amount of 175 points, winning by a margin of only 3 points. Northern Ireland's win was their first. Second place went to Greece. Third place was won by Egypt, fourth to Scotland and Kosovo taking the 5th. Egypt's third place was their first top 3 ever achieved by the country. Also, Monaco, the sixth placed country, received their best place ever in the contest.

Azerbaijan, the host country, and Scotland were the countries from the "Big Three" countries which placed in the first half of the scoreboard, reaching 7th place, respectively 4th place. Out of 30 countries who made it into the final, Sweden, the third country from the Big Three status countries, ended on the 28th position, receiving a total of 58 points.

On 4 May 2014, it was confirmed that the Baku Crystal Hall would be the venue of the Own Eurovision Song Contest 29.

Baku Crystal Hall (Azerbaijani: Bakı Kristal Zalı) is an indoor arena in Baku, Azerbaijan. Located on the coast of Baku near National Flag Square, construction of the arena began in August 2011 and finished in April 2012—in time for it to host its first major event, the 2012 edition of the Eurovision Song Contest.

Baku Crystal Hall was built in order to host the Eurovision Song Contest 2012. On 2 August 2011, the main agreement was signed with Alpine Bau Deutschland AG to construct the venue and preparations for construction had been started in the area. Even though the full cost of the contract was not named, the government allocated 6 million AZN for the construction of the venue. On 5 September 2011, it was announced that the venue will hold 25,000 spectators. The arena also contains VIP lounges.

The construction of the arena was expected to be completed by 31 March 2012. However, there was a delay of three weeks because of weather conditions, and the building was announced to have been completed on 16 April 2012. 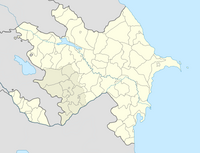 Baku
Location of the host city in Azerbaijan.

Baku is the capital and largest city of Azerbaijan, as well as the largest city on the Caspian Sea and of the Caucasus region. Baku is located 28 metres (92 ft) below sea level, which makes it the lowest lying national capital in the world. Baku is also the largest city in the world located below sea level. It is located on the southern shore of the Absheron Peninsula, which projects into the Caspian Sea. The city consists of two principal parts: the downtown area and the old Inner City (21.5 ha). At the beginning of 2009, Baku's urban population was estimated at just over two million people. Officially, about 25 percent of all inhabitants of the country live in Baku's metropolitan area.

Baku is divided into eleven administrative districts (raions) and 48 townships. Among these are the townships on islands in the Baku Bay and the town of Oil Rocks built on stilts in the Caspian Sea, 60 km (37 mi) away from Baku. The Inner City of Baku along with the Shirvanshah's Palace and Maiden Tower were inscribed as a UNESCO World Heritage Site in 2000. According to the Lonely Planet's ranking, Baku is also among the world's top ten destinations for urban nightlife.

The city is the scientific, cultural and industrial center of Azerbaijan. Many sizeable Azerbaijani institutions have their headquarters there, including SOCAR, one of the world's top 100 companies and others. The Baku International Sea Trade Port, sheltered by the islands of the Baku Archipelago to the east and the Absheron Peninsula to the north, is capable of handling two million tons of general and dry bulk cargoes per year. Baku hosted the 57th Eurovision Song Contest in 2012 and will host the 2015 European Games.

This is the first time in the history of the contest, that the competition will take place in Azerbaijan.

The draw that determined the semi-final allocation was held on June 19, 2014 at the Baku Crystal Hall. The participating countries, excluding the Big 3, were split into eight pots, based on voting history and geographical location. From these pots, 19 countries were allocated to compete in the first two semifinals, respectively 18 countries in the third semifinal. Germany was allocated to the third semi-final, but afterwards withdrew. The pots are as follows:

The big 3 will vote as follow: Azerbaijan in the first semi-final, Sweden in the second semi-final and Scotland in the third semi-final.

The running order for the three semi-finals was revealed on June 21, 2014. The draw for the Grand Final was announced on July 2, 2014.

Fifty-eight countries have confirmed participation in the Own Eurovision Song Contest 29 with two countries returning and fourt withdrawing.

The Own Eurovision Song Contest 29 will see the return of Greenland and Tunisia, while Austria, Germany, Switzerland and Syria have withdraw.

Tunisia and Greenland have last participated in the Own Eurovision Song Contest at the 27th edition. Tunisia was represented then by Reginald Penxten and Ameerah El Ouiglan, while Greenland by Marianna Hansen.

1.^ The country didn't vote in the Grand Final, so it was penalised, loosing 58 points. Haven't been punish for this, Wales would have ranked 21st with a total amount of 76 points.

56 sets of votes were submitted in the Grand Final. Three countries didn't manage to vote , these countries were :