To cope with the increasing number of countries wishing to participate in the contest, a new rule was introduced, the lowest-placed countries from the preceding edition's semifinals would not participate. This means that Albania, Algeria, Andorra, Denmark, Faroe Islands, Iceland, Israel, Kazakhstan, Kosovo, Norway, Romania, Russia and Ukraine were forced to withdraw. Austria and Malta withdrew voluntarily and Belgium, Czech Republic and Palestine returned in the competition, making a total of 45 countries competing. This is the second time in the history of the competition when this amount of countries participate, last time being in Malmö, Sweden in the 9th edition.

The 31st edition marks the return of the Big 5 status, meaning that the top 5 from previous edition will automatically qualify for the Grand Final, last time this status was used was in the Own Eurovision Song Contest 14, edition held in London, England. Also, in this edition only two semifinals will be used and the top 10 from each semifinal will qualify for the Grand Final, were only 26 (one wildcard will be used) countries will battle in order to win the contest.

Pastora Soler from Spain won the Grand Final with the song "Vive". Pastora's win was her second, being the single person that has won the contest twice, last time she won for Andorra in the Own Eurovision Song Contest 11. Spain has been participating since the first edition and has never missed the contest, making the longest waiting win in the contest, so far. This is also the second Spanish song that has won the contest. The song received a total amount of 205 points, winning by a margin of only 10 points.

Second place went to Wales. Third place was won by Scotland, being the fifth third place scored by the country. Fourth place went to Luxembourg and fifth to France. Palestine qualified for the first time in the history of the competition, taking a 13th place.

From the Big Five status countries, England made it into the Top 10, taking the 6th place. The other four countries manage to end into the bottom of the scoreboard, with the host country placing 21st, Italy and Montenegro taking the 23rd place, respectively 24th and Azerbaijan placed last out of 26 countries.

The Own Eurovision Song Contest 31 marks Greenland's last participation in the contest.

On September 1, 2014 it was announced that the National Arena Philip II of Macedonia will be the venue of the Own Eurovision Song Contest 31.

National Arena Philip II of Macedonia (Macedonian: Арена Филип II Македонски, Arena Filip II Makedonski) is a multi-purpose stadium in Skopje, Republic of Macedonia. Named after the ancient King Philip II of Macedon, it is currently used mostly for football matches, but sometimes also for music concerts or other events. It is the home stadium of FK Vardar and FK Rabotnički from Skopje, both of which compete in the Macedonian First League, as well as the home ground of the Macedonia national football team on almost all occasions (the other venues rarely chosen being the Goce Delčev Stadium in Prilep, or SRC Biljanini Izvori in Ohrid).

The project for the south stand was designed in 1977 by architects Dragan Krstev and Todorka Mavkova from Beton. Construction of the stadium in present form began in 1978, with the building of the south stand which took two years to finish. The reconstruction and expansion started after a long delay in project implementation in January 2008. The construction of a new north stand was finished in August 2009 and was put in use on 2 August 2009, the Macedonian national holiday "Ilinden". Ten days later, on 12 August, the Macedonia national football team played a friendly match against the current World Champions Spain, as part of the 100-year anniversary of football in Macedonia. The reconstruction of the southern stand started in 2009, which was put into operation on 30 July of that year for the match between FK Rabotnički and FC Liverpool. Soon after, the construction of the new western and eastern stands started. By mid July 2012, the majority of the stadium was completed with the reconstruction of the new pitch and athletic track. On 25 July 2012, FK Vardar played FC BATE Borisov in the 2nd qualifying round of the UEFA Champions League to re-open the stadium. 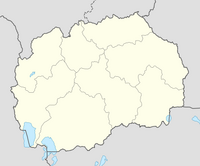 Skopje
Location of the host city in Macedonia.

Skopje (Macedonian: Скопје) is the capital and largest city of the Republic of Macedonia. It is the country's political, cultural, economic, and academic center. It was known in the Roman period under the name Scupi.

The territory of Skopje has been inhabited since at least 4000 BC; remains of Neolithic settlements have been found within the old Kale Fortress that overlooks the modern city centre. On the eve of the 1st century AD, the settlement was seized by the Romans and became a military camp. When the Roman Empire was divided into eastern and western halves in 395 AD, Scupi came under Byzantine rule from Constantinople. During much of the early medieval period, the town was contested between the Byzantines and the Bulgarian Empire, whose capital it was between 972 and 992. From 1282, the town was part of the Serbian Empire and acted as its capital city from 1346. In 1392, the city was conquered by the Ottoman Turks who renamed the town Üsküp. The town stayed under Ottoman control over 500 years, serving as the capital of pashasanjak of Üsküb and later the Vilayet of Kosovo. At that time the city was famous for its oriental architecture. In 1912, it was annexed by the Kingdom of Serbia during the Balkan Wars and after the First World War the city became part of the newly formed Kingdom of Serbs, Croats and Slovenes (Kingdom of Yugoslavia). In the Second World War the city was conquered by the Bulgarian Army, which was part of Axis powers. In 1944, it became the capital city of Democratic Macedonia (later Socialist Republic of Macedonia), which was a federal state, part of Democratic Federal Yugoslavia (later Socialist Federal Republic of Yugoslavia). The city developed rapidly after World War II, but this trend was interrupted in 1963 when it was hit by a disastrous earthquake. In 1991, it became the capital city of an independent Macedonia.

Skopje is located on the upper course of the Vardar River, and is located on a major north-south Balkan route between Belgrade and Athens. It is a center for metal-processing, chemical, timber, textile, leather, and printing industries. Industrial development of the city has been accompanied by development of the trade, logistics, and banking sectors, as well as an emphasis on the fields of culture and sport. According to the last official count from 2002, Skopje has a population of 506,926 inhabitants; according to two unofficial estimates for more recent period, the city has a population of 668,518 or 491,000 inhabitants.

This is the first time, in the history, the contest will take place in Macedonia.

The draw that determined the semi-final allocation was held on September 1, 2014 at the Philip II Arena. The participating countries, excluding the Big 5, were split into seven pots, based on voting history and geographical location. From these pots, 20 countries each were allocated to compete in each semifinal.

Forty-five countries have confirmed participation in the Own Eurovision Song Contest 31 with three countries returning and fifteen withdrawing.

12 points from the Grand Final

46 sets of votes were used in the voting ceremony in order to determine the winner.