The 32nd edition marks the return of the Big 6 status, meaning that the top 6 from previous edition will automatically qualify for the Grand Final, last time this status was used was in the Own Eurovision Song Contest 10, edition held in Copenhagen, Denmark. Also, in this edition the Second Chance Round was cancelled.

The winner song of the 32nd edition was "Zerkala" from Georgia performed by duo Grigoriy Leps and Ani Lorak. The country received a total amount of 169 points, winning by a margin of only 3 points. This is Georgia's first win and also their first top 5. Georgia's last best place was in the fourth special edition in the Own Eurovision Song Contest 20, edition held in Timișoara, Romania, where they received the 8th place. "Zerkala" is the first Russian language song that has ever won the contest.

From the countries with the Big 6 status, only Scotland and France ended in the top 10. France placed 8th and received a total of 120 points. The other four countries placed in the second half of the leaderboard, with England ending on the 18th place with 87 points, the host country Spain ended on the 20th place with 80 points, Egypt received a total of 73 points and ended on the 22nd place and Luxembourg, which placed last out of 26 countries, that were in the Grand Final, receiving a total amount of 61 points.

Situated in the Guindalera quarter of the district of Salamanca, it was inaugurated on June 17, 1931. It has a seating capacity of 25,000 and is regarded as the home of bullfighting in Spain.

This bullring was designed by the architect José Espeliú in the Neo-Mudéjar (Moorish) style with ceramic incrustations. The seats are situated in ten "tendidos". The price of the seats depends upon how close they are to the arena and whether they are in the sun or the shade (the latter being more expensive). The bullfighting season starts in March and ends in October; bullfights are held every day during the San Isidro Fiesta, and every Sunday or holiday during the season. Bullfights start at 6 or 7pm and last for two to three hours.

"Las Ventas" is located in the east of Madrid.

From 1913 to 1920, the national passion (bullfighting) gained such an important status that Madrid's former main bullring in Carretera de Aragon was not big enough. It was José Gómez Ortega "Joselito" who declared that a new "monumental" bullring had to be built, to open this part of Spain's heritage and culture to the whole city of Madrid. His friend the architect José Espeliú began to work on the project.

A family called Jardón donated the land to the Madrid Provincial Council, provided that they could run the arena for fifty years. The deputation accepted the proposal on November 12, 1920. On March 19, 1922, in the exact center of the prospective arena, the first stone was placed. The construction of the bullring would cost 12 million pesetas (4.5 million over budget), and it would replace the old bullring, dating from 1874.

"Las Ventas" was finished in 1929 and two years later, June 17, 1931, a charity bullfight was held with a full capacity crowd to inaugurate it. Bullfighting stopped during the Spanish Civil War and did not resume until May 1939.

There is a Pasodoble called 'Plaza de las Ventas' and the composer Maestro Manuel Lillo dedicated to this arena. 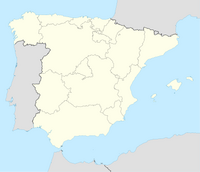 Madrid
Location of the host city in Spain.

Madrid (English /məˈdrɪd/, Spanish: [maˈðɾið], locally: [maˈðɾiθ]) is the capital and largest city of Spain. The population of the city is roughly 3.3 million and the entire population of the Madrid metropolitan area is calculated to be around 6.5 million. It is the third-largest city in the European Union, after London and Berlin, and its metropolitan area is the third-largest in the European Union after London and Paris. The city spans a total of 604.3 km2 (233.3 sq mi).

The city is located on the Manzanares River in the centre of both the country and the Community of Madrid (which comprises the city of Madrid, its conurbation and extended suburbs and villages); this community is bordered by the autonomous communities of Castile and León and Castile-La Mancha. As the capital city of Spain, seat of government, and residence of the Spanish monarch, Madrid is also the political, economic and cultural centre of Spain. The current mayor is Ana Botella from the People's Party (PP).

The Madrid urban agglomeration has the third-largest GDP in the European Union and its influences in politics, education, entertainment, environment, media, fashion, science, culture, and the arts all contribute to its status as one of the world's major global cities. Due to its economic output, high standard of living, and market size, Madrid is considered the major financial centre of Southern Europe and the Iberian Peninsula; it hosts the head offices of the vast majority of the major Spanish companies, such as Telefónica, Iberia or Repsol. Madrid is the 17th most livable city in the world according to Monocle magazine, in its 2014 index.

Madrid houses the headquarters of the World Tourism Organization (WTO), belonging to the United Nations Organization (UN), the SEGIB, the Organization of Ibero-American States (OEI), and the Public Interest Oversight Board (PIOB). It also hosts major international institutions regulators of Spanish: the Standing Committee of the Association of Spanish Language Academies, headquarters of the Royal Spanish Academy (RAE), the Cervantes Institute and the Foundation of Urgent Spanish (Fundéu BBVA). Madrid organizes fairs such as FITUR, ARCO, SIMO TCI and the Cibeles Madrid Fashion Week.

This is the first time the contest is held in Spain.

The draw that determined the semi-final allocation was held on September 23, 2014 at the Las Ventas Arena. The participating countries, excluding the Host and the Big 5, were split into six pots, based on voting history and geographical location. From these pots, 20 countries each were allocated to compete in each semifinal. The pots are as follows:

The draw of the semifinalas was held on September 30, 2014. Also, the draw for the Big 6 countries was revealed.

Forty-six countries have confirmed participation in the Own Eurovision Song Contest 32 with fifteen countries returning and fourteen withdrawing.

12 points from the Grand Final

The following countries were forced to withdraw: