Own Eurovision Song Contest 36, often referred to as OESC #36, was the 36th edition of Own Eurovision Song Contest. The contest took place in Damascus, Syria, following Helly Luv's win in the 35th contest in Finland with the song "Risk it all". This was the first time that Syria hosted the contest. The two semi-finals took place between 1 and 7 March 2015, and the final concluded on 14 March 2015. The shows were presented by singer and former representant of Syria, Paula Abdul.

Forty-five countries participated; this includes the return of Armenia, Azerbaijan, Cyprus, Hungary, Ireland, Kosovo, Lebanon, Moldova and San Marino. Overall, this is the third time in the history of the contest when this amount of countries participate, last time being in the Own Eurovision Song Contest 31. Algeria, Bosnia and Herzegovina, Croatia, Egypt, Faroe Islands, Liechtenstein, Malta, Slovakia, Switzerland and Ukraine announced their withdrawal from the 36th contest.

The winner of the edition was Emma Bale from Belgium with the song "All I Want". This is Belgium's second win in the competition since Own Eurovision Song Contest 4. The runner-up was former winner Ellie Goulding from England. Third place went to Serbia, being their best result in the history of the contest. Fourth place went to Finland, fifth went to Israel and sixth to Albania, this is their fourth sixth place in the competition, so far.

From the countries with the Big 6 status, only Norway and Sweden ended in the top 10. The host country, Syria ended on the 17th place out of 26 countries that were in the Grand Final, receiving a total amount of 83 points. 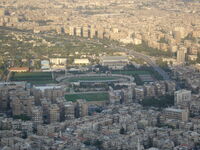 Abbasiyyin Stadium (Arabic: ملعب العباسيين‎) is a multi-use all-seater stadium in Damascus, Syria, currently used mostly for football matches and serves as the home venue of the Syrian national team. It is also home to Syrian Premier League clubs Al-Wahda, Al-Jaish and Al-Majd. The stadium which was built in 1976 is able to hold up to 30,000 spectators, being the 4th largest stadium in Syria.

The stadium was originally opened in 1957 with a capacity of 10,000 spectators, to host football matches and local athletics events.

On the occasion of the 5th Pan Arab Games in 1976, the stadium was entirely renovated and the capacity was expanded up to 40,000 spectators.

However, after the most recent renovation in March 2011, Abbasiyyin Stadium was turned into an all-seater stadium and the capacity was reduced to 30,000 seats.

Abbasiyyin Stadium hosted the 5th and 7th Pan Arab Games in 1976 and 1992 respectively as a main venue.

On 6 May 2001, a holy mass was conducted by Pope John Paul II in the Abbasiyyin Stadium.

Damascus
Location of the host city in Syria.

Damascus (Arabic: دمشق‎ Dimashq, Syrian Arabic pronunciation: [dɪˈmɪʃeʔ]) is the capital and the second largest city of Syria after Aleppo. It is commonly known in Syria as ash-Sham (Arabic: الشام‎ ash-Shām) and nicknamed as the City of Jasmine (Arabic: مدينة الياسمين‎ Madīnat al-Yāsmīn). In addition to being one of the oldest continuously inhabited cities in the world, Damascus is a major cultural and religious center of the Levant. The city has an estimated population of 1,711,000 (2009 est.).

Located in southwestern Syria, Damascus is the center of a large metropolitan area of 2.6 million people (2004). Geographically embedded on the eastern foothills of the Anti-Lebanon mountain range 80 kilometres (50 mi) inland from the eastern shore of the Mediterranean on a plateau 680 metres (2,230 ft) above sea-level, Damascus experiences a semi-arid climate due to the rain shadow effect. The Barada River flows through Damascus.

First settled in the second millennium BC, it was chosen as the capital of the Umayyad Caliphate from 661 to 750. After the victory of the Abbasid dynasty, the seat of Islamic power was moved to Baghdad. Damascus saw a political decline throughout the Abbasid era, only to regain significant importance in the Ayyubid and Mamluk periods. During Ottoman rule, the city decayed completely while maintaining a certain cultural prestige. Today, it is the seat of the central government and all of the government ministries.

The name of Damascus first appeared in the geographical list of Thutmose III as T-m-ś-q in the 15th century BC. The etymology of the ancient name "T-m-ś-q" is uncertain, but it is suspected to be pre-Semitic. It is attested as Dimašqa in Akkadian, T-ms-ḳw in Egyptian, Dammaśq (דמשק) in Old Aramaic and Dammeśeq (דמשק) in Biblical Hebrew. The Akkadian spelling is found in the Amarna letters, from the 14th century BC. Later Aramaic spellings of the name often include an intrusive resh (letter r), perhaps influenced by the root dr, meaning "dwelling". Thus, the Qumranic Darmeśeq (דרמשק), and Darmsûq (ܕܪܡܣܘܩ) in Syriac. The English and Latin name of the city is "Damascus" which was imported from Greek: Δαμασκός, which originated in Aramaic: ‎ דרמשק; "a well-watered place". In Arabic, the city is called Dimashqu sh-Shām (دمشق الشام), although this is often shortened to either Dimashq or ash-Shām by the citizens of Damascus, of Syria and other Arab neighbors and Turkey (as Şam). Ash-Shām is an Arabic term for "Levant" and for "Syria"; the latter, and particularly the historical region of Syria, is called Bilādu sh-Shām (بلاد الشام / "land of the Levant").

This is the first time the contest will take place in Syria.

The draw that determined the semi-final allocation was held on March 1, 2015 at the Abbasiyyin Stadium. The participating countries, excluding the Big 6 countries, were split into six pots, based on voting history and geographical location. From these pots, 20 countries each were allocated to compete in first semifinal, and 19 in second semifinal. The pots are as follows:

The host country, Syria will vote in the first semi-final. The rest of the big six countries will vote as follow: Sweden with Turkey in first semifinal, while Denmark with Northern Ireland and Norway and Turkey in second semifinal.