Own Eurovision Song Contest 38, often referred to as OESC #38, is the 38th edition of the Own Eurovision Song Contest musical event. The contest took place in Thessaloniki, Greece, following Helena Paparizou 's victory in the 37th edition with her song "Otan aggeli klene". This is the first time that Greece hosted the contest The contest consist of two semi-finals and a final presented by Douchess Nomikou.

The Big 6 status countries and also the countries that will automatically qualified for the Grand Final in the 38th edition are Czech Republic, France, the host country Greece, Northern Ireland, Poland and Russia.

The winner of the Own Eurovision Song Contest 38 was Shy'm from France with the song "L'Effet De Serre". This is France's first win ever in the competition. The runner-up was Bebe Rexha from Macedonia. Third place went to Switzerland, fourth place went to Belarus, fifth went to Romania and sixth to Austria. Austria's 6th place is their best result in the competition.

This is the third time in the history of the contest when an autoqualifier country wins the contest. The other countries with the Big 6 status placed in the second half of the leader board.

The arena was designed by the architects P. Gianettos, M. Guyon and T. Jeanblock between 1960 and 1962. It was built in 1966. The structure shares two of the architects with the Palais des Sports de Gerland in Lyon and has many similarities.

The building was redeveloped and updated in 2004 in preparation for the Athens 2004 Olympic Games. The updates involved reconstruction of all the building's external and internal areas. Apart from what is directly visible to everybody, other works included new electromechanical, air-conditioning and audiovisual facilities. New seats, CCTV and new lighting were also installed. 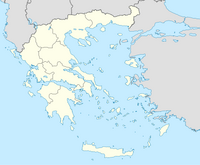 Thessaloniki
Location of the host city in Greece.

Thessaloniki (Greek: Θεσσαλονίκη [θesaloˈnici]), also known in English as Thessalonica or Salonica, is the second-largest city in Greece and the capital of Greek Macedonia, the administrative region of Central Macedonia and the Decentralized Administration of Macedonia and Thrace. Its honorific title is Συμπρωτεύουσα (Symprotévousa), literally "co-capital", and stands as a reference to its historical status as the Συμβασιλεύουσα (Symvasilévousa) or "co-reigning" city of the Eastern Roman (Byzantine) Empire, alongside Constantinople.

Thessaloniki is Greece's second major economic, industrial, commercial and political centre, and a major transportation hub for the rest of southeastern Europe; its commercial port is also of great importance for Greece and the southeastern European hinterland. The city is renowned for its festivals, events and vibrant cultural life in general, and is considered to be Greece's cultural capital. Events such as the Thessaloniki International Trade Fair and the Thessaloniki International Film Festival are held annually, while the city also hosts the largest bi-annual meeting of the Greek diaspora. Thessaloniki is the 2014 European Youth Capital.

Founded in 315 BC by Cassander of Macedon, Thessaloniki's history spans some 2,300 years. An important metropolis by the Roman period, Thessaloniki was the second largest and wealthiest city of the Byzantine Empire. Thessaloniki is home to numerous notable Byzantine monuments, including the Paleochristian and Byzantine monuments of Thessaloniki, a UNESCO World Heritage Site, as well as several Roman, Ottoman and Sephardic Jewish structures. The city's main university, Aristotle University, is the largest in Greece and the Balkans.

This is the first time the contest is held in Greece.

The draw that determined the semi-final allocation was held on April 24, 2015 at the Alexandreio Melathron. The participating countries, excluding the Big 6 countries, were split into six pots, based on voting history and geographical location. From these pots, 20 countries each were allocated to compete in first semifinal, and 20 in second semifinal. The pots are as follows:

The host country, Greece will vote in the second semi-final. The rest of the big six countries will vote as follow: France with Poland and Russia in first semifinal, while Czech Republic and Northern Ireland in second semifinal.