Forty-six countries have announced their participation in the contest. Czech Republic, Egypt, Lithuania, Malta, Northern Ireland, Portugal and Slovenia will return in the competition. Unfortunately Albania, Bulgaria, Iceland, Ireland, Morocco, Romania and Slovakia decided to withdraw from the contest. The 41st edition saw the comeback of Malta, returning after a five edition break.

The 41st edition saw the return of the Marcel Bezençon Awards, which were first introduced in the edition held in Budapest, Hungary.

After an exciting voting, Scotland was declared the winner of the Own Eurovision Song Contest 41, this marking the first time the country has won the contest. "How Deep Is Your Love" by Calvin Harris and Disciples received a total amount of 180 points, winning by a margin of 13 points. With Scotland's win marks that all the countries, that have participated in the past as part of the United Kingdom, have won the competition, at least once. The runner-up was England, marking the fourth time the country has missed winning the contest. Third place was occupied by Switzerland, fourth place went to Kazakhstan, being there best place in the competition, fifth to Denmark and sixth to Kosovo.

The host country manage to end in the top 10, receiving a total amount of 115 points and ending on the 10th place. From the other countries that were directly qualified in the Grand Final only England, Switzerland and Poland managed to place in the top 10. The other countries from the Big 6 manage to place in the other half of the leaderboard, France placed 19th with 82 points, while Sweden and Hungary placed in the bottom two, with Sweden on the 25th place and Hungary last out of 26 countries that there were in the Grand Final.

For more details on the host country, see Poland.

Spodek will be the venue of the Own Eurovision Song Contest 41. Spodek (meaning "saucer" in Polish) is a multipurpose arena complex in Katowice, Poland, opened in 1971 at ul. Korfantego 35 under the name Wojewódzka Hala Widowiskowo-Sportowa w Katowicach (Voivodeship Sport and Show Arena in Katowice), under which it is known in the Polish technical/architectural literature, and under which it formally functioned until 1997.

Aside from the main dome, the complex includes a gym, an ice rink, a hotel and three large car parks. It was the largest indoor venue of its kind in Poland until it was surpassed by Kraków Arena in 2014. It hosts many important cultural and business events. Music concerts are especially common non-sport events. Spodek can hold 11,500 people, although this number is in practice limited to 10,000 or even 8,000 due to stage set-ups obscuring the view. Its Polish name refers to a flying saucer (its shape resembles a UFO). Spodek is a major contribution to the cultural significance of Katowice in Poland, especially for the younger generations. It has also been used as an unofficial logo for the city on posters promoting redevelopment in Katowice. Spodek is home to HC GKS Katowice ice hockey club in the winter months.

It has played host to many up-and-coming bands, such as Chumbawamba in 1997, as well as dozens of world-famous bands. There are also held music festivals such as Rawa Blues Festival, Metalmania and Odjazdy. 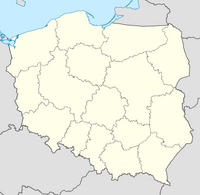 Poznań
Locations of the candidate cities.
TVP (Telewizja Polska) announced the conditions under which cities and venues had announced their interest in hosting the 41st contest:

The following cities are interested in hosting the 41st contest

On October 2 it was announced that Katowice will be the host of the Own Eurovision Song Contest 41. The host city is located in the southwestern Poland and the center of the Silesian Metropolis, with a population of 304,362 as of 2013.

Katowice is a center of science, culture, industry, business, trade, and transportation in Upper Silesia and southern Poland, and the main city in the Upper Silesian Industrial Region. Katowice lies within an urban zone, with a population of 2,746,460 according to Eurostat, and also part of the wider Silesian metropolitan area, with a population of 5,294,000 according to the European Spatial Planning Observation Network. Today, Katowice is a rapidly growing city and emerging metropolis. It is the 16th most economically powerful city by GDP in the European Union with an output amounting to $114.5 billion.

The participating countries, excluding the automatic finalists (host Poland and the Big Five), will be split into six pots, based on voting patterns from the previous ten editions. The pots were calculated and are as follows:

Twenty countries participated in the first semi-final. Hungary, Poland and Switzerland also voted in this semi-final..

Twenty countries participated in the second semi-final. England, France and Sweden also voted in this semi-final.

Retrieved from "https://ownesc.fandom.com/wiki/Own_Eurovision_Song_Contest_41?oldid=89999"
Community content is available under CC-BY-SA unless otherwise noted.