Forty-five countries have confirmed their participation in the 47th edition. The contest saw the return of Bosnia and Herzegovina, Greece, Iceland, Lithuania, Macedonia, Moldova and Portugal. Unfortunately, Albania, Armenia, Bulgaria, Finland, Hungary, Lebanon, Serbia, Sweden and Switzerland have withdrawn from the competition. Despite originally confirming, Sweden was forced to withdraw due to not submitting an entry before the deadline, while Switzerland withdraw due to a scandal between the broadcaster and the council.

After a tense voting process, Ukraine won the contest for the first time, with Tayanna's song "Osen'". Ukraine received a total amount of 181 points, winning by a margin of 16 points. The runner-up of the 47th edition was Morocco's "Srekni" by Hindi Ziadi, marking Morocco's best place in the competition.

For more details on the host country, see Russia.

SKK Peterburgsky (The Saint Petersburg Sports and Concert Complex) is an arena in Saint Petersburg, Russia. In Soviet time, it was called V. I. Lenin Sport & Concert Complex. The complex was completed in 1979 and opened on May 19, 1980. During concerts, it holds up to 20,000 people. Besides concerts, the arena is used for various sports, notably tennis, as it is the location of the St. Petersburg Open. Other sport events hosted at the SKK include bowling, tennis table, fencing. The SKK is also used for some trade fairs. 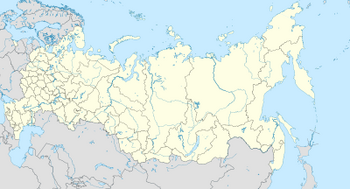 Yekaterinburg
Locations of the candidate cities.
RTR announced the conditions under which cities and venues had announced their interest in hosting the 47th contest:

The following cities were interested in hosting the 47th edition:

Saint Petersburg is Russia's second-largest city after Moscow, with five million inhabitants in 2012, and an important Russian port on the Baltic Sea. It is politically incorporated as a federal subject (a federal city). Situated on the Neva River, at the head of the Gulf of Finland on the Baltic Sea, it was founded by Tsar Peter the Great on May 27 1703. In 1914, the name was changed from Saint Petersburg to Petrograd, in 1924 to Leningrad, and in 1991 back to Saint Petersburg. Between 1713–1728 and 1732–1918, Saint Petersburg was the capital of imperial Russia. In 1918, the central government bodies moved to Moscow.

Twenty countries will participate in the first semi-final. Estonia, Italy and Netherlands will vote in this semi-final.

Twenty countries will participate in the second semi-final. Czech Republic, Russia and Turkey will vote in this semi-final.

The presenters announced the rankings as follows :

On 26 February 2017, a few hours after the entry for Liechtenstein was decided, it was found out that Vyan, the act which would represent the country is Croatian. After that announcement, the council decided that the entry should be changed due to the lack of a connection between VYAN and Liechtenstein. The act was changed with the second place of the Liechtensteiner national selection, "Ein Lied für Liechtenstein".

Retrieved from "https://ownesc.fandom.com/wiki/Own_Eurovision_Song_Contest_47?oldid=89993"
Community content is available under CC-BY-SA unless otherwise noted.