Forty-six countries have confirmed their participation in the competition. The 48th edition saw Armenia, the Faroe Islands, Finland, Hungary, Lebanon, Serbia, Sweden and Switzerland returning in the competition, while Austria, Belarus, Georgia, Iceland, Macedonia, Malta and Portugal decided to withdraw.

The 48th edition consisted of three shows, including two semi-finals on 12 and 19 August and the grand final on 26 August 2017.

After a tense voting process, Finland won the contest for the second time, with Diandra's song "Nadaa". Last time Finland won was in the Own Eurovision Song Contest 34, edition held in Zagreb, Croatia. Finland received a total amount of 167 points, narrowly beating Israel into second place with a margin of 1 point and Sweden into third place with a margin of 2 points. Fourth place went to Moldova, while the fifth place went to San Marino and the sixth place went Ukraine.

For more details on the host country, see Ukraine.

The Chernomorets Stadium is a football stadium built in 2011 in Odesa, Ukraine. The stadium has a capacity of 34,164 and is the home of FC Chornomorets Odesa. The stadium was constructed on the site of the old Soviet multi-use Central Stadium of the Black Sea Shipping Company (ChMP), which was demolished in 2009.

The venue was considered to be one of the stadiums of UEFA Euro 2012 but failed to be nominated as such.

The former ChMP stadium was built on the same site in 1935, and it was originally named as the Kosior Memorial Stadium after the First Secretary of the Communist Party of the Ukrainian SSR. After Stanislav Kosior was repressed in the 1930s, the name was changed to Shevchenko Park Stadium. After World War II, the stadium was passed to the ownership of the republican Ministry of Food and received name as the Central Stadium Kharchovyk. At the end of the 1950s, it was renamed as Avanhard Stadium after the Ukrainian Sport Society of industrial workers. In 1959, the stadium was renamed to the Central Stadium of the Black Sea Shipping Company or alternatively Central Stadium Chornomorets. 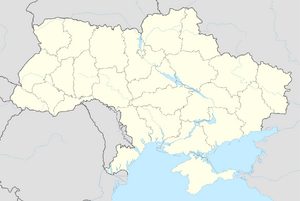 Sevastopol
Locations of the candidate cities.

NTU announced the conditions under which cities and venues had announced their interest in hosting the 48th contest:

The following cities were interested in hosting the 48th edition:

Odessa is the third most populous city of Ukraine and a major tourism center, seaport and transportation hub located on the northwestern shore of the Black Sea. Odessa is also an administrative center of the Odessa Oblast and a multiethnic cultural center. Odessa is sometimes called the "pearl of the Black Sea," the "South Capital" (under the Russian Empire and Soviet Union), and "Southern Palmyra.

Twenty countries will participate in the first semi-final. Russia, Ukraine and United Kingdom will vote in this semi-final.

Twenty countries will participate in the second semi-final. Croatia, Egypt and Morocco will vote in this semi-final.