For more details on the host country, see Finland.

Gatorade Center (formerly HK Areena, Elysée Arena, Typhoon and Turkuhalli) is an arena in Turku, Finland. It is primarily used for ice hockey, but it is also frequently used to host concerts and other events. HK Arena was the main venue for the 1991 Men's World Ice Hockey Championships and one of the venues in 1997 and 2003. 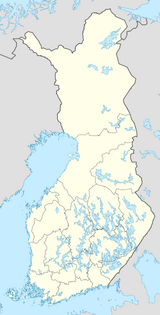 Turku
Locations of the candidate cities.

YLE announced the conditions under which cities and venues had announced their interest in hosting the 49th contest:

The following cities were interested in hosting the 49th edition:

Turku is a city on the southwest coast of Finland at the mouth of the Aura River, in the region of Southwest Finland. Turku, as a town, was settled during the 13th century and founded most likely at the end of the 13th century, making it the oldest city in Finland. It quickly became the most important city in Finland, a status it retained for hundreds of years. After Finland became part of the Russian Empire (1809) and the capital of the Grand Duchy of Finland was moved to Helsinki (1812), Turku continued to be the most populous city in Finland until the end of the 1840s, and it remains a regional capital and an important business and cultural center.

Because of its long history, it has been the site of many important events, and has extensively influenced Finnish history. Along with Tallinn, the capital city of Estonia, Turku was designated the European Capital of Culture for 2011. In 1996, it was declared the official Christmas City of Finland.

Due to its location, Turku is a notable commercial and passenger seaport with over three million passengers traveling through the Port of Turku each year to Stockholm and Mariehamn.

As of 31 December 2016, the population of Turku was 187,564, making it the sixth largest city in Finland. There were 318,168 inhabitants living in the Turku sub-region, ranking it as the third largest urban area in Finland after the Greater Helsinki area and Tampere sub-region. The city is officially bilingual as 5.2 percent of its population identify Swedish as a mother-tongue.

The draw to determine the allocation of the participating countries into their respective semi-finals took place on 29 January 2018, at Gatorade Center in Turku, Finland. The thirty-eighth semi-finalists had been allocated into six pots, based on historical voting patterns. Drawing from different pots helps to reduce the chance of so-called "bloc voting" and increase suspense in the semi-finals.

From these pots, 19 countries were allocated to compete in each semifinal. Israel, Sweden and Ukraine voted in the first semi-final, while Finland, Moldova and San Marino voted in the second semi-final.

Nineteen countries participated in the first semi-final. Israel, Sweden and Ukraine voted in this semi-final.

Nineteen countries participated in the second semi-final. Finland, Moldova and San Marino voted in this semi-final.