Own Eurovision Song Contest 54, often referred to as OESC #54, is the 54th edition of Own Eurovision Song Contest. It took place in Tampere, Finland, following Sini Yasemin's win in the 53rd edition with the song "Mayday". It was the third time Finland had hosted the contest, having previously done so in the thirty-fifth and forty-ninth editions. Organised by the Own European Broadcasting Union and host broadcaster Finnish Broadcasting Corporation, the contest was held at the Tampere Exhibition and Sports Centre, and consisted of two semi-finals and the final. The three live shows were hosted by Sanni Kurkisuo.

Forty-seven countries took part in the contest. Bosnia and Herzegovina, Georgia, Israel, Moldova and North Macedonia returned to the competition, while Algeria, Hungary and Morocco withdrew for various reasons. Azerbaijan had originally planned to participate, but announced its withdrawal after the deadline.

The winner was Russia with the song "Trogat zapreshcheno" performed by Hanna. This is country's third victory, the last one being in the 49th edition, once again hosted by Finland. The podium was completed by Belarus, which managed to equal their best result achieved back in the 23rd edition, receiving same amount of points, followed by Netherlands. Kazakhstan, which placed fourth also equaled their best result from 41st edition. Portugal and Armenia finished on fifth and sixth places respectively. The host nation Finland finished on the 23rd place. 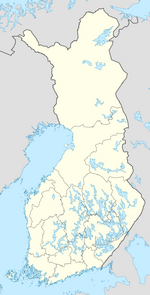 Tampere
Location of the host city.
Tampere is a city in Pirkanmaa, western part of Finland. It is the most populous inland city in the Nordic countries. It has often been rated as the most popular city in Finland.

Tampere has a population of 238,140 with the urban area holding 334,112 people and the metropolitan area, also known as the Tampere sub-region, holding 385,301 inhabitants in an area of 4,970 km2. Tampere is the second-largest urban area and third most-populous individual municipality in Finland, after the cities of Helsinki and Espoo and the most populous Finnish city outside the Greater Helsinki area, within which both Helsinki and Espoo are located. Tampere is a major urban, economic, and cultural hub for central Finland. Tampere is surrounded by beautiful lakes and eskers, the centre of the city is dominated by industrial heritage; the national landscape of Tammerkoski rapids and historical red brick buildings. Tampere is a city of people, where it’s okay just to be you. According to Finns, it is the most loved residential city in Finland which has something wonderfully seductive, dynamic but relaxing.

Tampere Exhibition and Sports Centre is one of the largest exhibition and sports centres in Finland. The five exhibition halls offer an excellent environment for functions and events. When used for the contest, the facilities in the Hall A will accommodate approximately 11,000 spectators.

The draw to determine the allocation of the participating countries into their respective semi-finals took place on 4 September 2020. The first part of the draw determined in which semi-final the Big Six would have to vote. The second part of the draw decided in which half of the respective semi-finals each country would perform, with the exact running order determined by the producers of the show at a later date. Twenty countries participated in the first semi-final and twenty-one in the second semi-final. From each semi-final, ten countries joined the "Big 6" in the final, where a total of twenty-six countries participated.

Twenty-one countries participated in the first semi-final. Cyprus, Monaco and Switzerland also voted in this semi-final.

Twenty-six countries participated in the final, with all 47 participating countries eligible to vote.

Further information: List of countries in the Own Eurovision Song Contest
Eligibility for potential participation in the Own Eurovision Song Contest requires a national broadcaster with active OEBU membership that would be able to broadcast the contest. As in every edition, an invitation to all the members has been sent in order to confirm whether they will participate or not. The following list of countries declined to state their reasons as shown below.

Retrieved from "https://ownesc.fandom.com/wiki/Own_Eurovision_Song_Contest_54?oldid=92127"
Community content is available under CC-BY-SA unless otherwise noted.