Own Eurovision Song Contest 55, often referred to as OESC #55, is the 55th edition of Own Eurovision Song Contest. It took place in Kaliningrad, Russia following Hanna's win in the 54th edition with the song "Trogat zapreshcheno". It was the fourth time Russia had hosted the contest, having previously done so in the sixteenth, forty-seventh and fiftieth editions. Organised by the Own European Broadcasting Union and host broadcaster Channel One Russia, the contest was held at the Kaliningrad Stadium, and consisted of two semi-finals and the final. The three live shows were hosted by Anna Pletnyova.

Forty-five countries took part in the contest. Gibraltar made its debut this edition. Hungary, Lithuania and Turkey returned to the competition, while Albania, Belgium, Bulgaria, Iceland, Liechtenstein and Montenegro withdrew for various reasons. The Faroe Islands were initially confirmed for the contest when the list of participants was announced. However, it was announced that they were subsequently unable to participate in the contest due to internal organizational problems.

The winner was San Marino with the song "Ladro di fiori" performed by Blanco. This is the country's second victory, the last one being in the 20th edition which was held in Timișoara, Romania. The podium was completed by the United Kingdom and Israel. Finland, Lithuania and Gibraltar finished on fourth, fifth and sixth places respectively. United Kingdom and Gibraltar managed to achieve their best result. so far, in the contest. The host nation Russia finished on the 13th place. 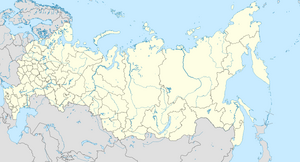 Kaliningrad
Location of the host city.

As a major transport hub, with sea and river ports, the city is home to the headquarters of the Baltic Fleet of the Russian Navy, and is one of the largest industrial centres in Russia. It was recognized as the best city in Russia in 2012, 2013 and 2014 according to Kommersant's magazine The Firm's Secret, the best city in Russia for business in 2013 according to Forbes, and was ranked fifth in the Urban Environment Quality Index published by Minstroy in 2019. Kaliningrad has been a major internal migration attraction in Russia over the past two decades, and was one of the host cities of the 2018 FIFA World Cup.

Its project is based on the concept of the Allianz Arena, which hosted matches of the 2006 World Cup in Germany. The first match was played on 11 April 2018, a football match between FC Baltika and PFC Krylia Sovetov Samara.

The draw to determine the allocation of the participating countries into their respective semi-finals took place on 4 April 2021. The first part of the draw determined in which semi-final the Big Six would have to vote. The second part of the draw decided in which half of the respective semi-finals each country would perform, with the exact running order determined by the producers of the show at a later date. Twenty countries participated in the first semi-final and nineteen in the second semi-final. From each semi-final, ten countries joined the "Big 6" in the final, where a total of twenty-six countries participated.

The thirty-nine semi-finalists were allocated into six pots, based on their geographical place and cultural similarities. Drawing from different pots helps in reducing the chance of so-called neighbour voting and increasing suspense in the semi-finals. Each time a country was drawn from the pot, its semi-final and half of the semi-final was determined.

Twenty countries participated in the first semi-final. Belarus, Netherlands and Portugal also voted in this semi-final.

Nineteen countries participated in the second semi-final. Armenia, Kazakhstan and Russia also voted in this semi-final.

During the results presentation, the Israeli entry was replaced with “Bailalo” by Inas X. According to some rumors, the incident happened because the singer, who already represented Connecticut in the first edition of Own USAvision Song Contest tried to interrupt the show to promote her song once again and to show Europe that her song was unfairly eliminated in the semi-final. However the Russian broadcaster later confirmed that this was necessary due to some copyrights issues that didn’t allow the actual entry to be played.