Own Eurovision Song Contest 56, often referred to as OESC #56, is the 56th edition of Own Eurovision Song Contest. The contest took place in Serravalle, San Marino, following the country's victory in the 55th edition with the song "Ladro di fiori" by Blanco. It was the second time San Marino had hosted the contest, having previously done so in the twenty-first edition. Organised by the Own European Broadcasting Union and host broadcaster San Marino RTV, the contest was held at the Teatro Nuovo, and consisted of two semi-finals and the final. The three live shows were hosted by Senhit and Valentina Monetta.

Forty-five countries took part in the contest. Azerbaijan, Belgium, Bulgaria, Faroe Islands, Iceland, Latvia and Montenegro returned to the competition, while Austria, Denmark, Lithuania, Luxembourg, Slovakia and Ukraine withdrew for various reasons. Estonia was initially confirmed for the contest when the list of participants was announced. However, their broadcasters was unable to submit an entry by the deadline and were forced to withdraw.

The winner was Cyprus with the song "Throne" performed by Andrew Lambrou. This was country's second victory in the contest, the last one being in the fifteenth edition. The podium was completed by Moldova and Serbia, which equaled their best result achieved in the 36th edition. Sweden, Belarus and Latvia rounded up the top 6, with Latvia equalling their best result from 33rd edition. The host nation San Marino finished 25h. 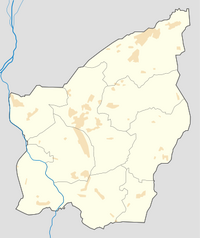 Serravalle
Location of the host city.

Serravalle is a castello located in the European republic of San Marino. With a population of 10,878 inhabitants (of which 2,000 are of foreign origin) and an area of 10.53 km2, it is not only the most densely populated municipality in San Marino, but it also contains its largest settlement (Dogana). Serravalle is located on the edge of the Apennine Mountains.18 FIFA World Cup.

Located in the northeastern part of the Republic of San Marino, Serravalle has an elevation of 148 m above sea level. It is the manufacturing centre of the republic and has industries producing textiles, ceramics, and metalwork. Serravalle was given to the republic in 1463 by Pope Pius II in return for San Marino’s help in opposing Sigismondo Pandolfo Malatesta, tyrant of Rimini, who had taken part in all the wars of Renaissance Italy from 1433 to 1464, mostly for purposes of self-aggrandizement. The castle of the Malatesta family, who ruled Rimini in the Middle Ages, still stands in the town. A highway connects Serravalle with Rimini, Italy, and with the city of San Marino, the republic’s capital. Pop. (2006 est.) Serravalle/Dogano, 9,740.

The town borders on Sammarinese municipalities of Domagnano and Borgo Maggiore and the Italian municipalities Verucchio, Rimini and Coriano. Serravalle counts a surrounding quarter named Galazzano, where the weather station and an industrial area are located.

First mentioned in a 962 document, in medieval times this town was called Castrum Olnani (later Olnano), the village of the elm trees. Serravalle attached to San Marino in 1463, during the last territorial expansion of the Republic.

Teatro Nuovo is a theater in the Republic of San Marino. It is a modern construction that is located in Dogana administrative division (castelli) of Serravalle not far from the border with Italy. It has a capacity for 872 people, which makes it the largest theater in San Marino. Due to a limited number of seats available and the still ongoing Covid-19 pandemic, the host broadcaster decided that this venue will be suitable for hosting the event with a limited number of audience.

The draw to determine the allocation of the participating countries into their respective semi-finals took place on 24 July 2021. The first part of the draw determined in which semi-final the Big Six would have to vote. The second part of the draw decided in which half of the respective semi-finals each country would perform, with the exact running order determined by the producers of the show at a later date. Nineteen countries participated in the first semi-final and nineteen in the second semi-final. From each semi-final, ten countries joined the "Big 6" in the final, where a total of twenty-six countries participated.

The thirty-eight semi-finalists were allocated into six pots, based on their geographical place and cultural similarities. Drawing from different pots helps in reducing the chance of so-called neighbour voting and increasing suspense in the semi-finals. Each time a country was drawn from the pot, its semi-final and half of the semi-final was determined.