It was announced during the meeting of the Head of Delegations that the dates for the two semi-finals are between 25 and 26 June 2012, with the final planned between 26 and 30 June 2012. This will be the first time Malta is hosting the contest. On 23 June 2012, it was confirmed that the Manoel Theatre would be the venue of the 6th edition.

Fourty-three countries have confirmed their participation on the contest. Georgia, Luxembourg and the Northern Ireland made their debut. Five countries made a return, respectively Austria, Macedonia, Monaco, San Marino and Switzerland. Estonia, Lithuania and Norway decided to withdraw.

The contest was won by Moldova. Sunstroke Project and Olia Tira with her song "Superman", received a total amount of 157 points, winning by a margin of only 6 points. Moldova's win was their first. Second place went to Andorra. Third place was won by Kosovo, fourth to Luxembourg and England taking the 5th.

The Manoel Theatre is reputed to be Europe's third-oldest working theatre, and the oldest working theatre in the Commonwealth of Nations. Located on Old Theatre Street (Triq it-Teatru l-Antik) in Valletta, it is now Malta's National Theatre and home to the Malta Philharmonic Orchestra (Orkestra Filarmonika Nazzjonali).

The Manoel Theatre is a small, six-hundred and twenty-three seat venue, with a lavish, oval-shaped auditorium, three tiers of boxes constructed entirely of wood and decorated with 22-carat gold leaf, and a pale blue, trompe-l'oeil ceiling that resembles a round cupola.

Hidden behind an austere facade that is fully in keeping with Valletta's Mannerist architecture, is a richly adorned, glorious Rococo interior. Despite numerous alterations over the years, it retains many of its old architectural features, such as the white Carrara marble staircase, shell-shaped niches, and Viennese chandeliers. Two water reservoirs beneath the floor create an acoustic environment that is so precise, that the hushed page-turnings of an orchestra conductor can be heard clearly throughout the auditorium 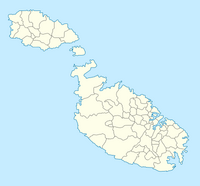 Valletta
Location of the host city in Malta.

Valletta is the capital of Malta, colloquially known as Il-Belt in Maltese. It is located in the central-eastern portion of the island of Malta, and the historical city has a population of 6,966.

The city is on the island of Malta so it shares its early history with the island. Immediately after the end of the Siege of Malta in 1565, the Order decided to found a new city on the Xiberras peninsula to fortify the Order's position in Malta and bind the Knights to the island. The foundation stone of Valletta was laid by the Grandmaster of the Order, Jean Parisot de la Valette on 28 March 1566. La Valette placed the first stone in Our Lady of Victories Church.

In his book Dell’Istoria della Sacra Religione et Illustrissima Militia di San Giovanni Gierosolimitano (English: The History of the Sacred Religion and Illustrious Militia of St John of Jerusalem), written between 1594 and 1602, Giacomo Bosio writes that when the cornerstone of Valletta was placed, a group of Maltese elders said "Iegi zimen en fel wardia col sceber raba iesue uquie" (Which in modern Maltese reads, "Jiġi żmien li fil-Wardija [l-Għolja Sciberras] kull xiber raba’ jiswa uqija," and in English, "There will come a time when every piece of land on Sciberras Hill will be worth its weight in gold").

Grand Master La Valette died on 21 August 1568 at age 74 and never saw the completion of his city. Originally interred in the church of Our Lady of the Victories, his remains now rest in St. John's Co-Cathedral among the tombs of other Grand Masters of the Knights of Malta. Francesco Laparelli was the city's principal designer and his plan departed from medieval Maltese architecture, which exhibited irregular winding streets and alleys. He designed the new city on a rectangular grid, and without any collacchio (an area restricted for important buildings). The streets were designed to be wide and straight, beginning centrally from the City Gate and ending at Fort Saint Elmo overlooking the Mediterranean; certain bastions were built 153 feet (47 m) tall. The Maltese architect Gerolamo Cassar was responsible for a number of the buildings.

After the Knights' departure and the brief French occupation, building projects in Valletta resumed under British rule. These projects included widening gates, demolishing and rebuilding structures, widening newer houses over the years, and installing civic projects. Nazi and Fascist air raids throughout World War II caused much destruction. The Royal Opera House, constructed at the city entrance in the 19th century, was one of the buildings lost to the raids. In 1980, the 24th Chess Olympiad took place in Valletta.

1.^ The country was selected by the host to qualify for the Grand Final. This procedure was first used in this edition.

43 sets of votes were sent.

Poland voted as jury. The countries revealed their votes in the following order.