Forty-four countries have confirmed participation in the 7th edition. The Own Eurovision Song Contest 7 will see Faroe Island and Poland debuting. Estonia, Lithuania, Norway and Slovenia returned in the competition and Azerbaijan, Finland, Luxembourg, Portugal and San Marino deciding to withdraw. The number of countries competing in the contest was a record at that moment, being the first time when 44 countries confirmed their participation in the contest.

The winner was Norway with the song "Europe's skies" sung by Alexandrer Rybak, which scored 121 points, beating Switzerland with a margin of only 3 points. The host country, Moldova finished in third place and Serbia in fourth, while France finished in fifth place.

Out of the countries with the 'Big 5' status, only Moldova managed to finish in the top ten, coming third. Andorra finished in 13th place receiving 92 points, England and Romania both received 89 points, ranking England on 14th place and Romania on 16th place. Kosovo finished in the bottom two countries receiving 20 points overall.

The venue of the seventh edition was chosen to be the Soroca City Stadium. Stadionul of Soroca city is a stadium and is located in Raionul Soroca, Moldova. The estimate terrain elevation above seal level is 49 metres. 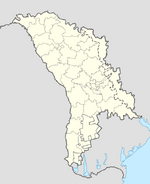 Soroca
Location of the host city in Moldova.

Moldova (Romanian: [molˈdova]), officially the Republic of Moldova (Romanian: Republica Moldova), is a landlocked country in Eastern Europe, bordered by Romania to the west and Ukraine to the north, east, and south. The capital city is Chișinău.

Moldova declared independence on August 27, 1991 as part of the dissolution of the Soviet Union. The current Constitution of Moldova was adopted in 1994. A strip of Moldovan territory on the east bank of the river Dniester has been under the de facto control of the breakaway government of Transnistria since 1990.

Due to a decrease in industrial and agricultural output following the dissolution of the Soviet Union, the service sector has grown to dominate Moldova's economy and currently composes over 60% of the nation's GDP. However, Moldova remains the poorest country in Europe.

Soroca is a Moldovan city situated on the Nistru (Dniester) river about 160 km north of Chişinău. It is the administrative center of Soroca District.

The city has its origin in the medieval Genoese trade post of Olchionia, or Alchona. It is known for its well-preserved stronghold, established by the Moldavian Prince Stephen the Great (Ştefan cel Mare in Romanian) in 1499. Its name is derived from the Slavic word for magpie.

The original wooden fort, which defended a ford over the Dniester/Nistru, was an important link in the chain of fortifications which comprised four forts (e.g. Akkerman and Khotin) on the Dniester, two forts on the Danube and three forts on the north border of medieval Moldova. Between 1543 and 1546 under the rule of Petru Rareş, the fortress was rebuilt in stone as a perfect circle with five bastions situated at equal distances.

During the Great Turkish War, John Sobieski's forces successfully defended the fortress against the Ottomans. It was of vital military importance during the Pruth Campaign of Peter the Great in 1711. The stronghold was sacked by the Russians in the Russo-Turkish War (1735–1739). The Soroca fortress is an important attraction in Soroca, having preserved cultures and kept the old Soroca in the present day.

The locality was greatly extended in the 19th century, during a period of relative prosperity. Soroca became a regional center featuring large squares, modernized streets, hospitals, grammar schools and conventionalized churches. In the Soviet period the town became an important industrial center for northern Moldova

Forty-four countries have confirmed participation in the 7th edition. The Own Eurovision Song Contest 7 will see Faroe Island and Poland debuting. Estonia, Lithuania, Norway and Slovenia returned in the competition and Azerbaijan, Finland, Luxembourg, Portugal and San Marino deciding to withdraw.

2.^ The countries were disqualified for not voting.
3.^ If Poland haven't been disqualified, it had won the semi-final 2.
1st place, Poland and 3rd place, Italy disqualification meant that 11th place, Faroe Island and 12th place, Israel passed to the Grand Final.

Eight countries didn't cast their votes, they were as follow.

Retrieved from "https://ownesc.fandom.com/wiki/Own_Eurovision_Song_Contest_7?oldid=90008"
Community content is available under CC-BY-SA unless otherwise noted.