The contest was won by Sweden's Agnes with her song "Release me", which received a total amount of 172 points winning by a margin of 17 points. Second place went to Romania, third to Scotland, fourth to Andorra, and Ireland taking the 5th.

Forty-four countries participated in the contest.Kazakhstan, Latvia and Åland Islands made their debut in the Own Eurovision Song Contest. The Own Eurovision Song Contest 8 saw the return of Armenia, Azerbaijan, Finland, Iceland, Montenegro and Portugal. Bosnia-Herzegovina, Bulgaria, Cyprus, Faroe Islands, Monaco, Northern Ireland, Poland and Ukraine have announced their withdrawal.

Telenor Arena, sometimes referred to as Fornebu Arena, is a multi-purpose indoor arena located at Fornebu in Bærum, outside Oslo, Norway. It serves as a venue for a variety of events, including concerts, exhibitions, action shows, family shows, TV and sport. It has a capacity for 15,000 spectators for sports and 23,000 for concerts, including 40 luxury boxes and club seating for 1,200. The venue has a fixed roof and an asphalt floor. The venue was opened ahead of the 2009 season as a replacement for Nadderud Stadion. It cost 585 million Norwegian krone (NOK) to build, of which NOK 300 million was for the sports venue.

During the 2000s, Nadderud was below standards for play in the top national league. Fornebu was at the time undergoing an urban redevelopment; after several years of negotiations and public grants, Stabæk secured a lot in 2004. Construction started in 2007. In 2010, a disagreement arose between the club and venue-owner Kjell Chr. Ulrichsen, with the latter demanding that the team leave the venue to allow for more event revenue. Telenor Arena has hosted the Eurovision Song Contest 2010, as well as concerts for Bon Jovi, Madonna, AC/DC, Tina Turner, Metallica, Scorpions Andrea Bocelli, Iron Maiden, Roger Waters The Wall, Foo Fighters, Jay-Z & Kanye West, Lady Gaga, Rihanna and Beyoncé. Telenor holds the naming rights. 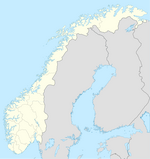 Oslo
Location of the host city in Norway.

Oslo is the capital of and most populous city in Norway. Founded around 1048 by King Harald III, the city was elevated to a bishopric in 1070 and a capital under Haakon V around 1300. Personal unions with Denmark from 1397 to 1523 and again from 1536 to 1814 and with Sweden from 1814 to 1905 reduced its influence. After being destroyed by a fire in 1624, the city was moved closer to Akershus Castle during the reign of King Christian IV and renamed Christiania in his honour. It was established as a municipality (formannskapsdistrikt) on 1 January 1838. Following a spelling reform, it was known as Kristiania from 1877 to 1925, when its original Norwegian name was restored.

According to the Norse sagas, Oslo was founded around 1049 by King Harald Hardråde. Recent archaeological research has uncovered Christian burials which can be dated to prior to AD 1000, evidence of a preceding urban settlement.[citation needed] This called for the celebration of Oslo's millennium in 2000.

It has been regarded as the capital city since the reign of King Haakon V (1299–1319), the first king to reside permanently in the city. He also started the construction of the Akershus Castle. A century later, Norway was the weaker part in a personal union with Denmark, and Oslo's role was reduced to that of provincial administrative centre, with the monarchs residing in Copenhagen. The fact that the University of Oslo was founded as late as 1811 had an adverse effect on the development of the nation.

Oslo was destroyed several times by fire, and after the fourteenth calamity, in 1624, King Christian IV of Denmark and Norway ordered it rebuilt at a new site across the bay, near Akershus Castle and given the name Christiania. Long before this, Christiania had started to establish its stature as a centre of commerce and culture in Norway. The part of the city built starting in 1624 is now often called Kvadraturen because of its orthogonal layout. The last plague outbreak ravaged Oslo in 1654. In 1814 Christiania once more became a real capital when the union with Denmark was dissolved.

Many landmarks were built in the 19th century, including the Royal Palace (1825–1848); Stortinget (the Parliament) (1861–1866), the University, Nationaltheatret and the Stock Exchange. Among the world-famous artists who lived here during this period were Henrik Ibsen and Knut Hamsun (the latter was awarded the Nobel Prize for literature). In 1850, Christiania also overtook Bergen and became the most populous city in the country. In 1877 the city was renamed Kristiania. The original name of Oslo was restored in 1925

3.^ The country won the wildcard battle, recevieng a ticket for the Grand Final.

40 of the 44th countries voted in the Grand Final.

Åland Islands didn't send their votes. The order was used to add as much excitement as possible. The spokespersons were shown alongside each country.