On August 9, 2014 it was announced that the Grand Stade de Casablanca will be the venue of the second edition of Own Eurovision Song Contest Winners Edition.

Grand Stade de Casablanca is a proposed title of the planned football stadium to be built in Casablanca, Morocco. Once completed in 2014, it will be used mostly for football matches and will serve as the home of Raja Casablanca, Wydad Casablanca and the Morocco national football team. The stadium was designed with a capacity of 80,000 spectators, making it the third-highest capacity stadium for football in Africa. Once completed, it will replace Stade Mohamed V.

he initial idea of the stadium was for the World Cup in 2010, for which Morocco lost their bid to South Africa. Nevertheless, the Moroccan government supported the decision to go ahead with the plans. This included five major stadiums across the country, including Stade de Tanger, Stade de Marrakech and two more in the major cities of Agadir and Fes. Grand Stade De Casablanca will be the largest. It will be the last to be completed, in 2014, ready for the 2015 Africa Cup of Nations, which will be hosted by Morocco. 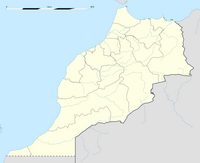 Casablanca
Location of the host city in Morocco.

Casablanca (Moroccan Arabic pronunciation: [kɑzɑblɑnkɑ], also الدار البيضاء ed-Dar el-Biḍa lit: "White house"), the largest city of Morocco, is located in the western part of the country on the Atlantic Ocean. It is also the largest city in the Maghreb, as well as one of the largest and most important cities in Africa, both economically and demographically.

Casablanca is Morocco's chief port and industrial center. The 2012 census, adjusted with recent numbers, recorded a population of about 4 million in the prefecture of Casablanca and about 5 million in the region of Grand Casablanca. Casablanca is considered the economic and business center of Morocco, while the national political capital is Rabat.

The leading Moroccan companies and international corporations doing business there have their headquarters and main industrial facilities in Casablanca. Recent industrial statistics show Casablanca retains its historical position as the main industrial zone of the country. The Port of Casablanca is one of the largest artificial ports in the world, and the largest port of North Africa. It is also the primary naval base for the Royal Moroccan Navy.

Thirty-five countries from all Europe will broadcast the event and participate in the voting. The participating countries are:

The thirty-five countries revealed their votes in the following order.