Edit
watch 01:54
Obi-Wan Finale - The Loop
Do you like this video?
Play Sound

The Own USAvision Song Contest, often shortened to OUSC or OUSASC is a song contest held on YouTube, primarily, among the member states of the Own Public Broadcasting Service since August 2020. The competition is based upon the existing Eurovision Song Contest which is held among the member countries of the European Broadcasting Union (EBU) since 1956.

Each US States' head of delegation gets to select an entry for each edition either by internal or national selection. Then the states get to vote for each show (semi-final or final) to determine the qualifiers and the winner of the edition.

Main article: List of states in the Own USAvision Song Contest

Any full member of the Own Public Broadcasting Service is allowed to send a song for the Own USAvision Song Contest. Each full member has got a certain broadcaster that is responsible for the choice of the artists and songs the state is sending for each edition.

These will be listed here alongside the edition in which they made their debut:

The fifty-one US States are allocated into six pots, based on their geographical place and cultural similarities. Drawing from different pots helps in reducing the chance of so-called neighbour voting and increasing suspense in the semi-finals. The pots may vary each edition, depending of the Automatic Qualifiers, Returning or Withdrawing states.

The contest's format was the same during the first editions; two semi-finals and a final were held. The top ten scored states from each semi-final advanced to the final. In the first edition, the host state was the sole automatic qualifier. However, for the next editions, this would change to big 6 and the top 6 from each edition will be a part of the big 6. 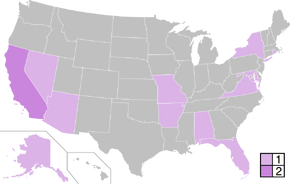 Map showing the presence of a state in the Big 6 up to the third edition.

In the first edition, ABC7 broadcaster, the organizers of the first edition, announced that California would be auto-qualified to the final as it contributed in the organization of the contest. Since the second edition, the six highest-placed states in the grand final were guaranteed a place in the following edition's grand final, without having to qualify. The remaining states had to enter the semi-final.

There are several rules of the contest in order to enter. The main rule of the contest is that the State has to officially join the Own Public Broadcasting Service with a certain broadcaster before applying to enter the contest. Regarding the broadcaster, any broadcaster can be accepted by the OUSC. The head of delegation of the certain state must be at the position for at least three editions. If the head of delegation is not satisfied with the state, one can swap the states with other users. There are also rules regarding the entries, such as that Eurovision Song Contest songs are not allowed to compete in the contest or that the singer must be over the age of 16.

The voting system used in the contest has been in place since the beginning, and is a positional voting system. Each state awards one set of 12, 10, 8–1 points to their 10 favourite songs.

Since the first edition, all the participating states have been voting in the final, including the states that failed to qualify from the semi-finals.

So far there has been no entry that received no points from any state.

The contest has so far 2 winning states.

Own USAvision Song Contest Winners Edition 1 will be an event edition organised to commemorate the first decade of the contest and to determine the contest's most popular winner of its first ten editions.